Pisa arrive at Stadio Pier Luigi Penzo on Saturday for the Serie B showdown with home side Venezia.

Venezia enter this game after a 1-1 Serie B tied result against Pisa.

It has not been often in recent times where Venezia have kept a clean sheet. The facts show that Venezia have been scored against in 6 of their previous 6 games, giving up 11 goals along the way.

Leading up to this clash, Venezia:

Looking at their form, and Pisa have been scored against in 6 of their last 6 matches, with opponents netting 14 goals in total. In defence, Pisa have some weaknesses to address. While that may be of interest, we must now wait to see if the trend shall be sustained in this upcoming game.

Going into this contest, Pisa haven’t won away from home in the past 2 league matches.

The previous league encounter between the two was Serie B match day 36 on 04/05/2021 when the final score was Pisa 2-2 Venezia.

On that day, Pisa managed 43% possession and 21 shots on goal with 7 on target. The goalscorers were Michele Marconi (37') and Davide Marsura (42').

The Venezia boss Ivan Javorčić does not have any fitness worries whatsoever ahead of this clash thanks to a fully healthy squad available to choose from. Tanner Tessmann is ineligible for this match because of suspension.

It looks as if Arancioneroverdi may well use a 5-3-2 formation for this game, beginning the first half with Niki Maeenpaeae, P. Wisniewski, Marco Modolo, Pietro Ceccaroni, Antonio Candela, Maximilian Ullmann, L. A. Fiordilino, Gianluca Busio, M. Kofod Andersen, Andrija Novakovich and Joel Pohjanpalo.

Out of a mainly full-strength squad, there is only the lone fitness issue for the Pisa manager Rolando Maran to contend with. Antonio Caracciolo (Cruciate Ligament Injury) misses out for this game.

We believe that Pisa are likely to put one past this Venezia lineup, but it probably shouldn’t be enough to avoid a loss.

We’re expecting a narrow 2-1 winning score for Venezia at the end of the match. Should be a good one. 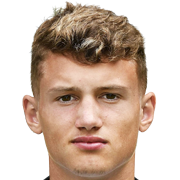 Normally used in the Centre Midfield position, Mickaël Cuisance was born in Strasbourg, France. After making a first senior appearance for Borussia Mönchengladbach in the 2017 - 2018 season, the dangerous Midfielder has accumulated 2 league goals in this Serie B 2022 - 2023 season so far in a total of 4 appearances.

We have made these Venezia v Pisa predictions for this match preview with the best intentions, but no profits are guaranteed. Please always gamble responsibly, only with money that you can afford to lose. Good luck!