Rayo Vallecano are going up against the visiting Real Sociedad at Campo de Fútbol de Vallecas in the La Liga tie on Saturday.

View all Rayo Vallecano v Real Sociedad tips, stats and our pre-match poll below - plus the latest betting odds.

Rayo Vallecano won’t want a repeat of their last result here after a 0-2 La Liga loss in their previous game against Real Sociedad.

In that match, Rayo Vallecano managed 40% possession and 6 shots at goal with 0 on target. Real Sociedad had 5 shots on goal with 3 on target. Alexander Sørloth (15') and Barrenetxea (36') scored for Real Sociedad.

Andoni Iraola's Rayo Vallecano have hit the target a sum total of 7 times over their preceding 6 outings. The corresponding number of goals that have been scored against them in that time is 7.

Going into this game, the form guide shows that Rayo Vallecano:

A tendency of at least one team drawing a blank in games involving Real Sociedad has become apparent in recent matches. Looking at their last six meetings reveals that this has happened 5 times. During these clashes, opposing sides have hit a goal total of 1 and Real Sociedad have scored 14. We will have to see if that trend can be sustained into this next match.

Looking at their past head to head clashes stretching back to 03/01/2016 tells us that Rayo Vallecano have won 0 of them & Real Sociedad 2, with the number of drawn results being 4.

A combined sum of 18 goals were scored between them during those clashes, with 8 from Franjirrojos and 10 created by Txuri-urdin. That is an average goals per game value of 3.

The previous league contest between the two was La Liga match day 34 on 01/05/2022 when it finished Rayo Vallecano 1-1 Real Sociedad.

On that occasion, Rayo Vallecano had 44% possession and 13 shots on goal with 7 on target. The scorer was Radamel Falcao (78').

Real Sociedad had 8 attempts at goal with 3 on target. Alexander Sørloth (33') was the scorer.

The Rayo Vallecano boss Andoni Iraola does not have any fitness concerns whatsoever coming into this game with a completely healthy group to choose from.

We’re inclined to think that Rayo Vallecano could find themselves struggling to be putting a goal past this Real Sociedad side who we reckon will score & stay on top.

We’ve gone for a 0-1 winning score for Real Sociedad at the end of this game. 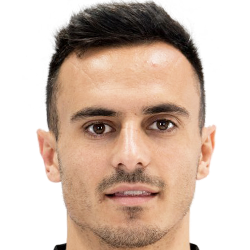 Normally deployed in the Left Wing position, Álvaro García was born in Utrera, Spain. Having made his senior debut playing for Granada in the 2013 - 2014 season, the gifted Forward has managed 3 league goals in this LaLiga 2022 - 2023 campaign to date in a total of 16 appearances.

While we have made these predictions for Rayo Vallecano v Real Sociedad for this match preview with the best of intentions, no profits are guaranteed. Always gamble responsibly, and with what you can afford to lose. We wish you the best of luck.