River Plate make the trip to Estadio José Amalfitani on Sunday for the Superliga game with home team Vélez Sarsfield.

View all of the Vélez Sarsfield v River Plate predictions, poll and stats below (plus the best game odds).

Vélez Sarsfield will be wanting a better result here following the 2-1 Superliga loss in their previous game against Colón.

Their latest results reveal that quality has been evident in the Vélez Sarsfield backline. Vélez Sarsfield have given the opposition little, resulting in the tally of goals that have gone in at their end during their past six clashes standing at 4. Such a trend might not be sustained into this match, though.

After a loss in their previous game against Godoy Cruz in Superliga action, River Plate will be aiming to make amends here.

In that match, River Plate managed 70% possession and 18 shots at goal with 8 on target. At the other end, Godoy Cruz had 8 shots on goal with 4 of them on target. Martín Ojeda (21') and Gonzalo Abrego (24') scored for Godoy Cruz.

The numbers tell their own story, and River Plate have been scored against in 5 of their last 6 games, seeing their opponents hit 8 goals overall. Defensively, River Plate can certainly do much better.

Looking over their most recent head-to-head meetings dating back to 24/02/2018 shows that Vélez Sarsfield have won 3 of them and River Plate 2, with the tally of drawn matches being 1.

10 goals were scored between the two sides throughout the course of those matches, with 5 from El Fortín and 5 created by Los Millonarios. This gives an average number of goals per game equal to 1.67.

Availability isn’t a big problem, with just a single fitness concern for the Vélez Sarsfield boss Alexander Medina to contend with thanks to an almost full-strength squad. Lautaro Giannetti (Ruptured cruciate ligament) is out of contention.

We’re inclined to think that Vélez Sarsfield could well find it tough to breach the defence of this River Plate side who we think will likely end up scoring and staying ahead.

We therefore see a highly competitive game with a 0-1 advantage for River Plate at the end of this one. 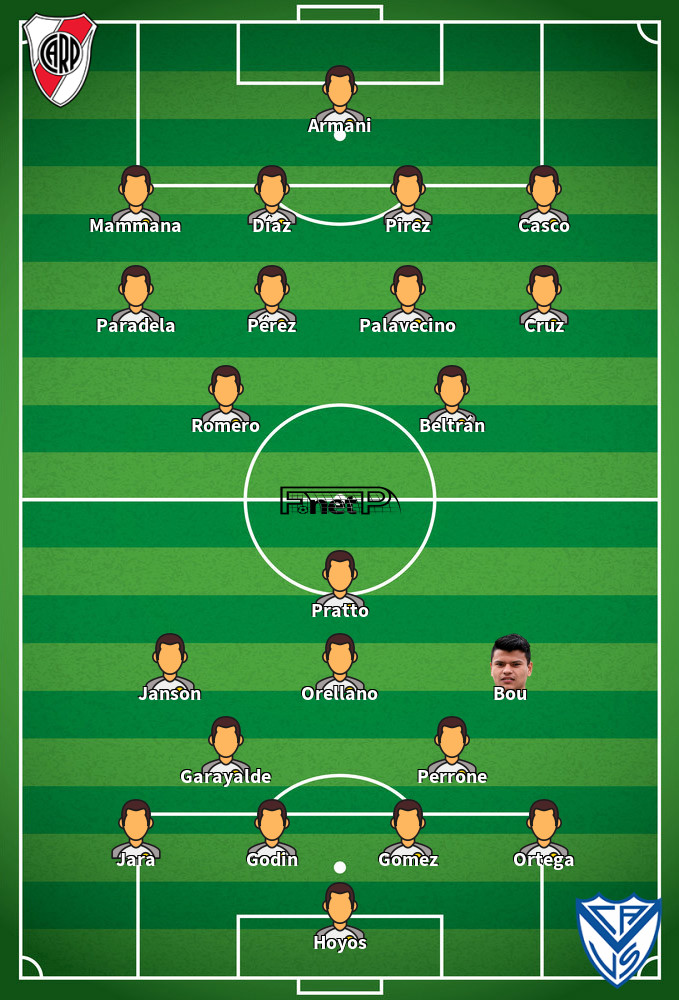 While we have made these predictions for Vélez Sarsfield v River Plate for this match preview with the best of intentions, no profits are guaranteed. Always gamble responsibly, and with what you can afford to lose. Best of luck.