Return to this page a few days before the scheduled game when this expired prediction will be updated with our full preview and tips for the next match between these teams.
Full-Time Result Prediction
👉
Verl to Win

Verl face off with visiting club RW Essen at Sportclub Arena in the 3rd Liga meeting on Saturday.

Verl will play in this fixture following a 0-0 3rd Liga drawn result versus RW Essen.

It’s been seldom in recent games that Verl haven’t conceded. It will be a concern for them that Verl have been scored against in 6 of their previous 6 games, shipping 8 goals along the way.

Ahead of this meeting, Verl are undefeated in their previous 7 league matches at home.

During their 6 latest matches, Christoph Dabrowski's RW Essen have found the net a total of 9 times therefore yielding them a goals per game average of 1.5.

The Verl boss Michél Kniat will be thankful to have no fitness concerns whatsoever before this game owing to a fully healthy group available to select from.

Due to a fully injury-free squad to choose from, the RW Essen boss Christoph Dabrowski does not have any fitness concerns to speak of before this clash.

We feel that over the course of the game, RW Essen will have to play well to register a score against this Verl outfit who we think will be able to get on the scoresheet themselves in a winning performance.

That’s why our selection here is for a good tussle with a 1-0 victory for Verl when the referee blows for full-time. 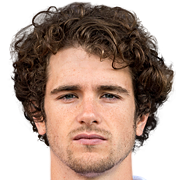 Typically taking to the field in the Centre Midfield position, Mael Corboz was born in Mobile, USA. After having made a senior debut playing for Go Ahead Eagles in the 2019 - 2020 season, the gifted Midfielder has managed to score 3 league goals in the 3. Liga 2022 - 2023 campaign to date from a total of 17 appearances.

While we have made these predictions for Verl v RW Essen for this match preview with the best of intentions, no profits are guaranteed. Always gamble responsibly, and with what you can afford to lose. Good luck if you do place a bet today.