Toulouse take on away team Sochaux at Stadium de Toulouse in this Ligue 2 game on Monday.

To see all of our predictions, user poll & stats for Toulouse v Sochaux, scroll down (inc. the best betting odds).

Toulouse will be wanting a better result here following the 5-3 Ligue 2 loss in their previous game against Grenoble.

Toulouse have been quite ineffective in attack in more recent games. Their ‘goals for’ figure stands at just 4 against opponents over the course of their last six outings. In those meetings, Toulouse have also seen the tally of goals against them come to 15.

Coming into this clash, Toulouse have not won at home in their last 9 league games. No joy for the home fans.

Sochaux come into this match following on from a 2-1 Ligue 2 win to defeat ESTAC in their last fixture.

The numbers tell their own story, and Sochaux have been scored against in 5 of their last 6 matches, letting opponents get 8 goals overall. Defensively, Les Lionceaux could really do with shoring things up. We will just have to find out whether or not that trend will be continued on here.

Coming into this meeting, Sochaux have left without a victory over Toulouse FC when they have played them away from home in the previous 3 matches in the league.

Looking over their past head to head clashes going back to 01/10/2011 shows that Toulouse have won 4 of them and Sochaux 2, with the number of drawn matches being 0.

A combined total of 18 goals were scored between the two sides in these games, with 11 of them from Toulouse and 7 being from Les Lionceaux. The average number of goals per game works out to 3.

The previous league game between these sides was Ligue 1 match day 33 on 12/04/2014 when the final score was Sochaux 2-0 Toulouse.

Toulouse got 5 attempts at goal with 3 of them on target.

The match was refereed by Alexandre Castro.

Sochaux manager Omar Daf has to choose a team with limited availability. Younès Kaabouni (Ruptured knee ligament) and Yann Kitala (Tibia Fracture) are those who can’t be considered.

We feel that in this game, Sochaux will likely create enough chances to find the back of the net against this Toulouse lineup, although it probably won’t quite be enough to avoid defeat.

We’re going for a very close game with a 2-1 winning score for Toulouse at full-time. Looking forward to this.

Both Teams to Score Prediction for Toulouse vs Sochaux
Yes 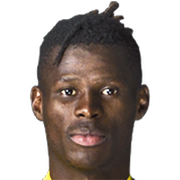 Generally played in the Striker position, Vakoun Issouf Bayo was born in Daloa, Ivory Coast. Having played his first senior match for Étoile du Sahel in the 2015 - 2016 season, the gifted Forward has hit 2 league goals in the Ligue 2 2020 - 2021 campaign to date coming from a total of 1 appearances.

We have made these Toulouse v Sochaux predictions for this match preview with the best intentions, but no profits are guaranteed. Please always gamble responsibly, only with money that you can afford to lose. Best of luck.