The Premier League meeting at Molineux Stadium on Saturday will see home side Wolves lock horns with Arsenal.

All Wolves v Arsenal game predictions, stats and user poll are shown below - along with the latest match odds.

Wolves will be looking for another win after a 0-1 Premier League triumph versus Aston Villa.

Fewer than three goals per game were recorded in 5 of the last 6 meetings where Wolverhampton Wanderers have been participants. In terms of the goal split in this period, opposing sides scored a total of 3 and Wolves managed a tally of 8. That sort of trend isn’t assured to be carried forward into this game, though.

Arsenal go into this encounter following on from a 4-0 Premier League win in the defeat of Norwich City in their previous game.

In that match, Arsenal had 51% possession and 13 attempts on goal with 8 on target. For Arsenal, goals were scored by Pierre-Emerick Aubameyang (33', 67'), Granit Xhaka (37') and Cédric Soares (81'). For their opponents, Norwich City had 8 shots on goal with 2 of them on target.

Mikel Arteta's Arsenal have turned their attacks into goals a total of 10 times throughout their latest 6 matches. The overall goals that they have conceded during those same matches comes to 6.

An examination of their most recent head-to-head clashes stretching back to 12/02/2011 shows that Wolves have won 1 of these games & Arsenal 2, with the number of drawn matches standing at 3.

A total of 15 goals were yielded between them throughout the course of those matches, with 6 of them for Wolves and 9 coming from The Gunners. This gives an average number of goals per game equal to 2.5.

The last league clash between the two was Premier League match day 11 on 02/11/2019 which ended up with the score at Arsenal 1-1 Wolverhampton Wanderers.

That day, Arsenal had 57% possession and 10 attempts on goal with 4 of them on target. Their only player on the scoresheet was Pierre-Emerick Aubameyang (21').

At the other end, Wolverhampton Wanderers got 25 attempts at goal with 8 of them on target. Raúl Jiménez (76') scored.

There is just one fitness concern for the Wolves manager Nuno Espírito Santo to be concerned about thanks to an almost full-strength squad. Phil Ofosu-Ayeh (Heel Bone Injury) is out of contention.

Arsenal manager Mikel Arteta has a number of players out of action. Lucas Torreira (Ankle Injury) and Bernd Leno (Stretched Ligament) are not ready for selection.

Our feeling is that Arsenal could find themselves up against it to hit the back of the net against this Wolves lineup who we think might well just have the edge.

With that in mind, we reckon that it will be a very competitive game with a 1-0 winning margin for Wolves at the end of the 90 minutes.

Over/Under 2.5 Goals Prediction for Wolves vs Arsenal
Under 2.5 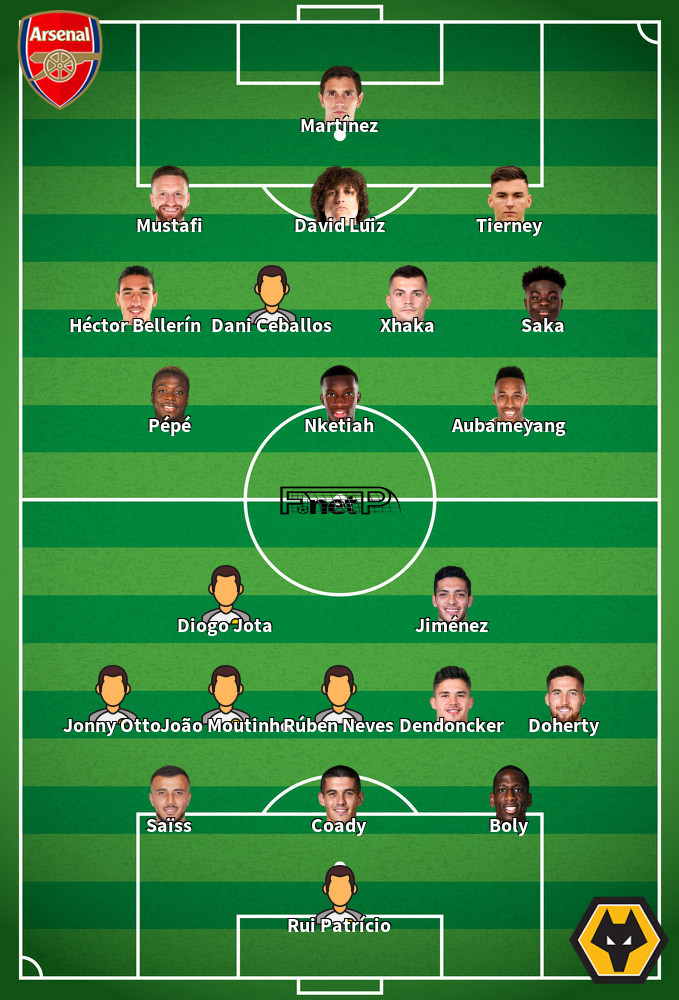 Normally taking up the Left Wing position, Diogo Jota was born in Massarelos, Portugal. Having made his senior debut playing for Paços de Ferreira in the 2014 - 2015 season, the gifted Forward has scored 6 league goals in the Premier League 2019 - 2020 season to date from a total of 28 appearances.

While we have made these predictions for Wolves v Arsenal for this match preview with the best of intentions, no profits are guaranteed. Always gamble responsibly, and with what you can afford to lose. Good luck!