FC Lorient head to Stade de l'Abbé Deschamps on Friday for the Ligue 1 showdown with home side AJ Auxerre.

Scroll down to see all of the predictions, poll and statistics for AJ Auxerre v FC Lorient (including the best match odds).

AJ Auxerre won’t want a repeat of their last result here after a 5-0 Ligue 1 defeat in their last game at the hands of Rennes.

Heading into this fixture, AJ Auxerre have not registered a win against FC Lorient in their previous 3 league matches.

FC Lorient head into the match after a 3-2 Ligue 1 win to defeat Nantes in their last game.

In that game, FC Lorient had 48% possession and 13 shots at goal with 5 on target. For FC Lorient, the goals were scored by Dango Faissal Ouattara (19'), Yoann Cathline (60') and Ibrahima Koné (74'). For their opponents, Nantes got 9 attempts at goal with 4 on target. Ignatius Ganago (13') and Moses Simon (85') scored for Nantes.

In as many as 5 of the previous 6 clashes featuring FC Lorient, three or more goals have gone in. The overall average goals scored per match within that spell is 4, with the number of goals averaged by FC Lorient being 2.17. With no two games being the same, we will just have to wait and see if the trend might be sustained here in this game.

Checking on their past head to head clashes dating back to 11/02/2012 shows that AJ Auxerre have won 2 of these & FC Lorient 1, with the tally of drawn results standing at 3.

12 goals were scored between the two sides throughout the course of those matches, with 7 of them from AJA and 5 coming from Les Merlus. This gives an average number of goals per game equal to 2.

The match was refereed by Benjamin Lepaysant.

It doesn’t get much better regarding selection, with just the lone fitness concern for the AJ Auxerre manager Jean-Marc Furlan to be concerned about from an otherwise fully-primed group of players. Théo Pellenard (Torn Knee Ligament) won’t play.

Due to a fully healthy group available for selection, the FC Lorient boss Régis Le Bris doesn’t have any fitness worries whatsoever before this match.

We’re thinking that FC Lorient and AJ Auxerre could both well score here although it’s hard to see a clear-cut winner.

Shouldn’t be much in it, and a draw looks quite a realistic result. We’re therefore anticipating a hard-fought 1-1 score draw when all is said and done. 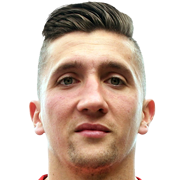 Mostly played in the Central Attacking Midfielder position, Mattias Autret was born in Morlaix, France. Having made a first senior appearance for Brest in the 2009 - 2010 season, the goalscoring Midfielder has got 2 league goals in the Ligue 1 2022 - 2023 season to date coming from a total of 7 appearances.

We have made these AJ Auxerre v FC Lorient predictions for this match preview with the best intentions, but no profits are guaranteed. Please always gamble responsibly, only with money that you can afford to lose. Good luck if you do place a bet today.