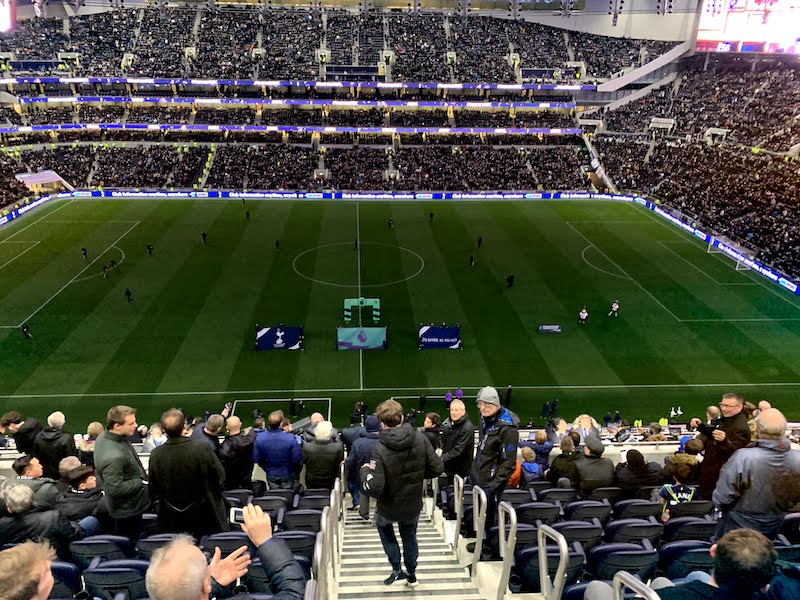 Plans were first filed in 2007, but it wasn’t until 2016 that the Mayor of London formally rubber-stamped the construction and work could begin.

The Tottenham Hotspur Stadium, built by global architectural firm Populus, does not feature a retractable roof like the one at Cardiff’s Millenium Stadium. However, the roof fully covers all spectator seating leaving just the pitch open to the elements.

The impressive stadium opened following several tests and fan familiarisation events on the 3rd of April 2019. Heung-min Son scored the first Premier League goal at the stadium in a 2-0 Spurs victory over fellow Londoners Crystal Palace.

The Arena’s Construction Was No Easy Feat

Spurs first announced in 2007 that the White Hart Lane site was being considered for a new stadium build, after years of speculation surrounding where the club would call home next.

The decision to build the new stadium became necessary due to the growth in the club’s fanbase, as well as the financial benefits of having a larger ground - benefits which had been reaped by many of Spurs’ rivals over the previous years.

The Northumberland Development Project was announced in 2008 and featured plans to regenerate the surrounding area over the next 20 years, with the stadium featuring as the centrepiece.

A club museum, homes, shops and other facilities would also be constructed as part of the regeneration.

Construction of the new stadium commenced in 2015 and was completed in two stages to allow the old White Hart Lane to continue to serve as Spurs’ home ground for a period. The old stadium was completely demolished after the 2016-17 season, meaning Spurs had to use Wembley for home and European matches.

Construction was largely completed by the end of 2018 and test events were planned but were eventually delayed due to the discovery of faulty wiring throughout the stadium.

Test events including an Under 18 fixture and Spurs “legends” match went off without any problems, and the Haringey Borough Council gave the stadium the green light to open.

While not retractable, the Tottenham Hotspur Stadium’s roof is certainly still a magnificent feat of engineering. A cable net structure is used for the roofing structure and weighs just 600 tonnes.

The structure was lifted into place during construction in just two weeks, and a glass finish ensures that the stadium is built to the highest possible quality - avoiding any clouding or yellowing that can be seen on similar structures using plastic or polycarbonate.

The cable net structure can also be observed on the exterior and the roof of West Ham’s Olympic Stadium.

Populus, who also oversaw the construction of other London stadia such as Arsenal’s Emirates Stadium and Wembley Stadium, English football’s centrepiece venue.

The exterior of the Tottenham Hotspur Stadium features swathes of LED panels and brushed aluminium.  This gives the ground a much more pleasant appearance and allowing it to blend seamlessly with the built-up residential surrounding area.

With fans unable to watch Spurs at the glittering venue due to the pandemic, Spurs supporters and football fans alike were cordially invited by the club to scale the stadium to enjoy panoramic views of both the stadium and London’s skyline.

Costing £39, fans are able to climb to the stadium’s roof and even touch the famous cockerel bust which is a direct replica of the one featured on the roof of the old White Hart Lane ground - complete with dents from when Paul Gascoigne decided to fire at it with an air rifle!