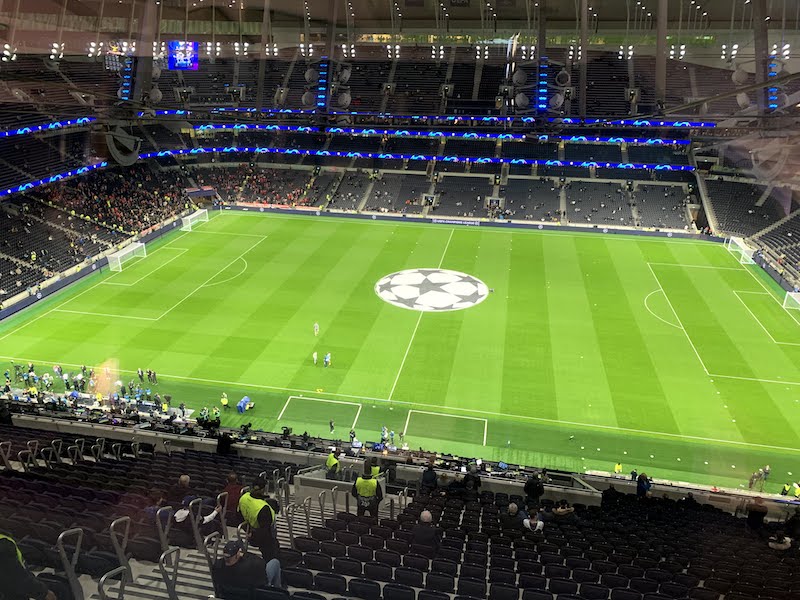 Tottenham Hotspur moved into their new billion-pound stadium in April of 2019, just weeks before their appearance in the Champions League final against Liverpool in Madrid.

The state-of-the-art arena features several world-class, jaw-dropping facilities and is completely optimised for football acoustics, leading many to label the stadium as one of the world’s best.

The football playing surface at the Tottenham Hotspur Stadium is composed of Desso GrassMaster hybrid turf. However, the stadium has the capacity for two pitches, with an artificial surface stowed under the football pitch for use in NFL games, concerts, and other events.

Spurs have gotten off to a rocky start at their new home after failing to qualify for the Champions League last season in their first term under new boss Jose Mourinho.

The GrassMaster turf, pioneered and installed by Tarkett Sports, is now widely used by many top football, rugby and NFL teams around the world. It works by inserting artificial grass fibres either before, during or after the pitch is seeded, with these fibres covering approximately 3% of the total surface.

The fibres then entwine with the natural grass surface to provide even coverage, shorten recovery time, and improve drainage.

The first rolls of our new pitch are laid at #SpursNewStadium pic.twitter.com/Wg9JEm4YRY

This hybrid system was used for the first time at a World Cup for the 2010 tournament in South Africa, with the Mbombela Stadium and Peter Mokaba Stadium using the technology.

The pitch is, however, 440 square metres larger than the pitch at their previous stadium, White Hart Lane. The distance between the pitch and the stands at the Tottenham Hotspur Stadium has also been kept to a minimum to enhance the atmosphere on matchdays.

On the north, east and west sides of the pitch, the gap to the supporter seating is just eight metres. On the south side, the distance from the goal to the South Stand is just five metres wide.

The pitch measures 105 metres by 68 metres, and these pitch dimensions are not uncommon in football and are, in fact, the most frequently chosen pitch size in professional football. This size comfortably fits into the pitch size rulings for most competitions around the world.

For a majority of domestic competitions, limitations are lenient with the only stipulation being that the touchline is between 90 metres and 120 metres in length - 100 to 130 yards.

The retractable pitch at the cutting edge of stadia

To maintain the condition of the pitch used by the Spurs first team, there is a second pitch at the Tottenham Hotspur Stadium for use in NFL matches and other non-football events such as concerts.

Located beneath the hybrid grass football pitch is a synthetic turf pitch that has so far been used mostly for American football events and concerts.

The retractable football pitch is similar to the one used by NFL franchise the Arizona Cardinals, but it is the first in the world to split into three sections before being retracted.

The need for the pitch having three distinct sections is so that it can avoid colliding with the two columns which support the foundations of the South Stand.

The transformation is almost complete!

The retractable pitch must move alongside these columns as it is slid beneath the South Stand car park in a process which can be finished in between 25 minutes and an hour.

The NFL pitch is 1.6 metres lower than the football turf to allow for ideal viewing for the front row at both NFL and Spurs matches.