The 3rd Liga game at Marschweg-Stadion on Sunday sees home side Oldenburg do battle with opponents Dynamo Dresden.

Our predictions, user poll and statistics for Oldenburg v Dynamo Dresden can be found here (plus the best game odds).

Oldenburg, following on from their previous result, will be hoping for more of the same after a 0-1 3rd Liga triumph vs Zwickau.

The only name on the scoresheet from Oldenburg was Kebba Badjie (3').

It’s been seldom in recent times where Oldenburg have shown defensive steel. The facts show that Oldenburg have failed to prevent opponents from scoring in 5 of their previous 6 matches, letting in 13 goals on the way.

Ahead of this meeting, Oldenburg are without a win at home for the past 5 league matches. Things will have to change soon.

In their last fixture, Dynamo Dresden drew 1-1 in the 3rd Liga tie with Meppen.

The only name on the scoresheet from Dynamo Dresden was Stefan Kutschke (72'). Marek Janssen (91') scored for Meppen.

It has become apparent that Dynamo Dresden have suffered from a lack of goals in their past 6 clashes, netting the poor return of just 4. In those matches, Dresden have also seen the overall goal tally of their opponents equal 7. Previous results aside, it remains to be seen if that trend shall be replicated in this next match.

Ahead of this meeting, Dynamo Dresden are without a win away from home in their last 4 league games.

Almost everyone can be considered, as there’s just a single fitness concern for the Oldenburg gaffer Dario Fossi to contend with from an otherwise complete group. Dominik Kisiel (Shoulder Injury) is sidelined.

Our assessment here is that Oldenburg will need things to go their way to score against this Dynamo Dresden outfit who we think will get a goal themselves and run out victorious.

We’re therefore predicting a highly competitive game with a 0-1 win for Dynamo Dresden at the end of the match. 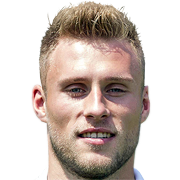 Generally playing in the Striker position, Max Wegner was born in Lübbecke, Germany. After making a first senior appearance for SV Werder Bremen II in the 2011 - 2012 season, the goalscoring Forward has managed to score 5 league goals in this 3. Liga 2022 - 2023 campaign so far in a total of 14 appearances.

While we have made these predictions for Oldenburg v Dynamo Dresden for this match preview with the best of intentions, no profits are guaranteed. Always gamble responsibly, and with what you can afford to lose. Good luck!