The First Division A tie at Stade Maurice Dufrasne on Friday sees home side Standard Liège take on Eupen.

All Standard Liège v Eupen game predictions, stats and user poll are shown below - as well as up-to-date odds.

Standard Liège will be looking to improve on their last outing here after the 4-1 First Division A defeat in their last game at the hands of Antwerp.

In their last 6 fixtures, Ronny Deila's Standard Liège have netted 5 times - an average number of goals scored per match of 0.83.

Coming into this fixture, Standard Liège are undefeated in their last 2 league matches at home.

In their last fixture, Eupen drew 1-1 in the First Division A match with Oud-Heverlee Leuven.

The stats tell the story, and Eupen have been scored against in 5 of their last 6 matches, conceding 13 goals in all. In defence, Eupen certainly have room for improvement. That kind of trend might not be carried forward into this next game, of course.

Inspecting their most recent head-to-head meetings stretching back to 21/11/2020 shows that Standard Liège have won 4 of these & Eupen 1, with the number of drawn matches standing at 1.

A combined total of 14 goals were yielded between them throughout the course of those matches, with 10 of them for Les Rouches and 4 coming from Pandas. That is an average goals per game value of 2.33.

The last league contest between the two was First Division A match day 16 on 05/11/2022 which ended up with the score at Eupen 2-0 Standard Liège.

On the other side, Standard Liège got 8 shots on goal with 4 of them on target.

Eupen manager Edward Still has not got a full squad to pick from. Amadou Keita (Muscle Injury) and Regan Charles-Cook (Ankle Injury) won’t be making appearances.

It looks to us that Standard Liège will probably create enough chances to score more than one when they line up against Eupen, who will be up against it to score themselves.

Accordingly, we see a fairly comfortable 2-0 margin for Standard Liège at the conclusion of the game. 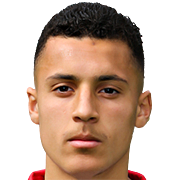 Normally taking up the Central Attacking Midfielder position, Selim Amallah was born in Hautrage, Belgium. Having made his senior debut playing for Royal Excel Mouscron in the 2015 - 2016 season, the accomplished Midfielder has contributed 4 league goals in this Pro League 2022 - 2023 campaign so far in a total of 9 appearances.

We have made these Standard Liège v Eupen predictions for this match preview with the best intentions, but no profits are guaranteed. Please always gamble responsibly, only with money that you can afford to lose. Good luck with your selections.