Return to this page a few days before the scheduled game when this expired prediction will be updated with our full preview and tips for the next match between these teams.
Full-Time Result Prediction
👉
FC Juniors OÖ to Win

Vorwärts Steyr are the guests at Raiffeisen Arena on Friday for the 2. Liga game with home side FC Juniors OÖ.

FC Juniors OÖ, who won their previous game, will hope for a similar result following a 0-3 2. Liga triumph vs Dornbirn.

In that game, FC Juniors OÖ had 47% possession and 5 shots on goal with 3 of them on target. For FC Juniors OÖ, goals were scored by Patrick Plojer (64') and Valentino Müller (77'). For their opponents, Dornbirn had 5 attempts at goal with 1 on target. Felix Gurschler (9' Own goal) was the scorer for Dornbirn.

Fixtures involving FC Juniors OÖ have usually been engaging affairs of late with a lot of goalmouth action expected. Over their past half dozen clashes alone, a total of 20 goals have gone in for both sides combined (at an average of 3.33 goals per game) with 13 of those belonging to Juniors OÖ.

Going into this one, FC Juniors OÖ have not beaten Vorwärts Steyr in their last 2 league games.

After being beaten in their last game against SV Lafnitz in 2. Liga action, Vorwärts Steyr and their travelling supporters will be hoping that they can get a better result in this one.

In that game, Vorwärts Steyr managed 51% possession and 5 attempts on goal with 1 on target. For their opponents, SV Lafnitz got 10 attempts at goal with 5 of them on target. Philipp Wendler (60') and Patrick Bürger (63') scored for SV Lafnitz.

The trend of at least one team not scoring a goal in games involving Vorwärts Steyr has become evident in recent matches. Examining their last 6 outings reveals that it’s occurred 5 times. During these clashes, their opponents have managed a goal total of 8 while Steyr have scored 5. That kind of pattern isn’t assured to be carried forward here, however.

The previous league match featuring these clubs was 2. Liga match day 11 on 28/11/2020 which ended up with the score at Vorwärts Steyr 3-1 FC Juniors OÖ.

The referee was Oliver Drachta.

In an otherwise full-strength group, there is only the sole fitness issue for the Vorwärts Steyr boss Andreas Milot to be concerned with. Michael Halbartschlager (Cruciate Ligament Rupture) won’t be in action.

We believe that FC Juniors OÖ should really fashion enough chances to find the net more than once while possibly not conceding when they come up against Vorwärts Steyr, who may well find it hard finding the net themselves.

We’re predicting a pretty comfortable 2-0 winning score for FC Juniors OÖ by the time that the referee blows the final whistle. 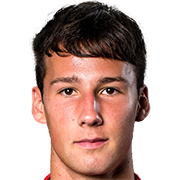 Normally used in the Central Attacking Midfielder position, Fabian Benko was born in Munich, Germany. After having made a senior debut playing for LASK Linz in the 2018 - 2019 season, the talented Midfielder has netted 4 league goals in this 2. Liga 2020 - 2021 campaign to date in 24 appearances.

While we have made these predictions for FC Juniors OÖ v Vorwärts Steyr for this match preview with the best of intentions, no profits are guaranteed. Always gamble responsibly, and with what you can afford to lose. Good luck with your selections.