Full predictions, pre-match stats and user poll for Wacker Innsbruck v SKU Amstetten are shown on this page (plus the best game odds).

Wacker Innsbruck will be looking for a repeat result of a 1-2 2. Liga triumph versus SC Austria Lustenau.

Daniel Bierofka's FC Wacker Innsbruck have found the net a sum total of 10 times in their last six outings. The comparative tally of goals that have been scored against them in that time is 5.

Coming into this clash, FC Wacker Innsbruck are without a home win in the past 2 league games.

SKU Amstetten come into this game following on from a 0-1 2. Liga win to defeat Dornbirn in their most recent fixture.

The only scorer from SKU Amstetten was Dino Kovačec (58').

A tendency of at least one team not scoring a goal in games featuring SKU Amstetten has been evident in recent matches. Examining their last 6 games reveals that this has occurred 5 times. During those clashes, opposing sides have hit a goal total of 4 while Amstetten have scored 6.

Heading into this fixture, SKU Amstetten are undefeated in their previous 2 league matches away from home.

The last league match featuring the two was 2. Liga match day 5 on 02/10/2020 which ended up with the score at SKU Amstetten 2-2 FC Wacker Innsbruck.

Owing to an otherwise available group of players, there is just a single fitness worry for the SKU Amstetten manager Joachim Standfest to be concerned about. Manuel Seidl (Unknown Injury) won’t be in action.

When taking everything into account, SKU Amstetten may not find it easy to register a score against this Wacker Innsbruck lineup who we think should score one, at least.

We’re therefore anticipating a good battle with a 1-0 winning score for Wacker Innsbruck at the end of this one. 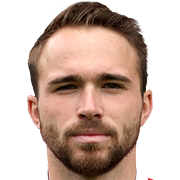 Normally deployed in the Central Attacking Midfielder position, Fabio Viteritti was born in Lörrach, Germany. Having played his first senior match for Energie Cottbus in the 2018 - 2019 season, the dangerous Midfielder has struck 4 league goals in this 2. Liga 2020 - 2021 campaign to date in 19 appearances.

We have made these Wacker Innsbruck v SKU Amstetten predictions for this match preview with the best intentions, but no profits are guaranteed. Please always gamble responsibly, only with money that you can afford to lose. We wish you the best of luck.