KAA Gent are the guests at Cegeka Arena on Sunday for the First Division A game with home side Genk.

Our tips, poll and stats for KRC Genk v KAA Gent can all be found here (plus the best game odds).

Genk will be looking for a repeat result of the 1-2 First Division A success against Union Saint-Gilloise.

Three or more goals per match have been seen in 5 of the past 6 meetings where KRC Genk have been involved. Opposing sides scored 5 of them in this period while KRC Genk managed a tally of 16. With no two games being the same, time will tell whether such a trend might persist in this game.

Their prior results show that KRC Genk:

KAA Gent will come into the meeting following a 3-0 Conference League win vs Shamrock Rovers in their last fixture.

A sequence of outstanding displays by the KAA Gent defence has resulted in the number of goals they’ve conceded amounting to 4 from their previous 6 outings in total. In that period, their forwards have scored 8.

Going into this contest, KAA Gent have not been beaten by KRC Genk when they've played them away from home in the last 3 league matches.

A glance at their past head to head clashes going back to 26/10/2020 shows that Genk have won 2 of these and KAA Gent 3, with the number of drawn matches standing at 1.

An aggregate of 12 goals were shared by the two clubs during those clashes, with 4 of them from Blauw-Wit and 8 netted by De Buffalo's . This gives an average number of goals per game equal to 2.

The last league game between the two was First Division A - Play-Offs match day 5 on 15/05/2022 which finished with the scoreline of KRC Genk 0-2 KAA Gent.

That day, KRC Genk had 54% possession and 8 attempts at goal with 2 on target.

We feel that over the course of the game, KAA Gent will do well to find the net against this KRC Genk lineup who we think will likely score & stay on top.

We’re therefore anticipating a very even contest with a 1-0 winning score for KRC Genk at the end of the match. 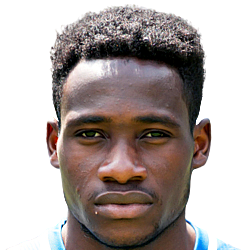 Regularly taking to the field in the Left Wing position, Joseph Paintsil was born in Accra, Ghana. Having played his first senior match for Ferencvárosi TC in the 2017 - 2018 season, the dangerous Forward has contributed 4 league goals in this First Division A 2022 - 2023 campaign so far coming from a total of 8 appearances.

We have made these KRC Genk v KAA Gent predictions for this match preview with the best intentions, but no profits are guaranteed. Please always gamble responsibly, only with money that you can afford to lose. Best of luck.