Östers IF visit NP3 Arena on Saturday for the Superettan tie with home side GIF Sundsvall.

All GIF Sundsvall v Östers IF match predictions, user poll and stats are shown below (including the best match odds).

GIF Sundsvall, who won their previous game, will hope for a similar result following the 1-4 Superettan victory over Norrby IF.

Their latest results reveal that quality has been evident in the GIF Sundsvall backline. GIF Sundsvall have been miserly, resulting in the total number of goals that have gone past their goalkeeper over the course of their past 6 outings standing at 4. That being said, it remains to be seen if the trend will be sustained here in this match.

Coming into this clash, GIF Sundsvall haven't been defeated in their previous 4 league matches at home.

Östers IF come into this encounter after a 1-0 Superettan win to defeat GAIS in their most recent game.

Throughout their six most recent matches, Denis Velic's Östers IF have managed to stick the ball in the net 11 times therefore yielding them the goals per game average of 1.83.

Coming into this meeting, Östers IF are unbeaten in their previous 5 league matches away from home.

Looking at their past head-to-head meetings dating back to 23/07/2011 tells us that GIF Sundsvall have won 4 of these games & Östers IF 1, with the tally of drawn matches standing at 1.

A total of 18 goals were scored between the two sides throughout the course of those matches, with 13 of them for Giffarna and 5 for Östers. The average number of goals per game works out to 3.

The previous league game featuring these sides was Superettan match day 5 on 11/05/2021 which ended up with the score at Östers IF 0-2 GIF Sundsvall.

In that match, Östers IF managed 56% possession and 6 shots on goal with 2 of them on target.

At the other end, GIF Sundsvall had 6 shots at goal with 4 of them on target. Pontus Engblom (63') and Johan Bengtsson (91') scored.

The match was refereed by Adi Aganovic.

The GIF Sundsvall boss Henrik Åhnstrand doesn’t have any fitness concerns at all ahead of this game thanks to a completely injury-free squad to pick from.

Owing to a fully healthy squad to choose from, the Östers IF manager Denis Velic has zero fitness worries at all before this game.

We think that Östers IF could find themselves up against it to break down this GIF Sundsvall team who we think should be able to get on the scoresheet themselves in a winning performance.

We’re therefore expecting a good battle with a 1-0 victory for GIF Sundsvall at the end of the match. 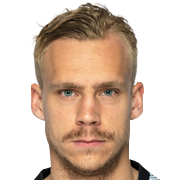 Normally taking to the field in the Striker position, Pontus Engblom was born in Sundsvall, Sweden. After having played his first senior match for AFC Eskilstuna in the 2009 season, the goalscoring Forward has contributed 9 league goals in this Superettan 2021 season so far in 28 appearances.

We have made these GIF Sundsvall v Östers IF predictions for this match preview with the best intentions, but no profits are guaranteed. Please always gamble responsibly, only with money that you can afford to lose. We wish you the best of luck.