Halmstads BK journey to Iver Arena on Wednesday for the Superettan showdown with hosts Västerås SK.

All of our predictions, stats and the user poll for Västerås SK v Halmstads BK are shown below (including the best match odds).

Västerås SK will be looking for an improved result here after a 1-2 Superettan losing effort in their last game against Norrby IF.

The only name on the scoresheet from Västerås SK was Filip Tronêt (4'). Oke Akpoveta (25') and Ezequiel Montagna (27') scored for Norrby IF.

It has been a rare occasion in recent games that Västerås SK have shown defensive steel. It will be a concern for them that VSK have seen their defence breached in 5 of their previous 6 clashes, leaking 10 goals on the way.

After a loss in their previous game against Akropolis IF in Superettan competition, Halmstads BK and their fans will hope to get a better result this time.

A succession of dependable performances by the Halmstads BK defensive players has resulted in the number of goals they’ve conceded standing at 4 from their previous 6 clashes in total. In that period, the number of goals that they have scored themselves amounts to 11. Having said that, we must now wait to see if such a trend shall be sustained in this game.

Coming into this clash, Halmstads BK are undefeated in their previous 5 league matches away from home.

The last league contest featuring these clubs was Superettan match day 20 on 17/08/2019 when the final score was Västerås SK 2-3 Halmstads BK.

The referee was Granit Maqedonci.

Västerås SK manager Thomas Askebrand has zero fitness concerns to speak of before this clash thanks to a fully injury-free group available to select from.

Owing to an otherwise available squad, there is just the one fitness problem for the Halmstads BK manager Magnus Haglund to be concerned with. Viktor Ljung (Cruciate Ligament Injury) won’t be playing here.

In our opinion, Västerås SK might well have a job on their hands to hit the back of the net against this Halmstads BK side who we think should get the vital goal that wins it.

We therefore see a very even contest with a 0-1 victory for Halmstads BK at full-time. 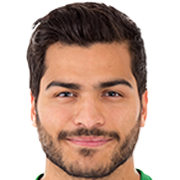 Regularly taking up the Right Wing position, Karwan Safari was born in Sweden. Having made his senior debut playing for Västerås SK in the 2020 season, the gifted Forward has struck 3 league goals in this Superettan 2020 campaign so far in a total of 5 appearances.

We have made these Västerås SK v Halmstads BK predictions for this match preview with the best intentions, but no profits are guaranteed. Please always gamble responsibly, only with money that you can afford to lose. Good luck if you do place a bet today.