IFK Göteborg face off with visiting club Östersunds FK at Gamla Ullevi in the Allsvenskan game on Sunday.

IFK Göteborg go into this game coming off the back of a 3-3 Allsvenskan draw versus IK Sirius.

Mikael Stahre's IFK Göteborg have netted 12 times in their past 6 outings. At the other end, the number of goals that they have conceded in those same games stands at 6.

Since suffering a loss in their previous game against Mjällby AIF in Allsvenskan action, Östersunds FK will be aiming to make amends here.

Demonstrating their appetite for productive matches, we’ve seen goals 20 times in the previous 6 matches in which Östersunds FK have taken to the field, giving a mean average of 3.33 goals for each meeting. Opposition teams have got 16 from this total. Such a trend won’t necessarily be sustained into this next game, of course.

Their past results show that Östersunds FK:

Looking over past results between these clubs going back to 20/08/2018 tells us that these fixtures have been disappointments for Östersunds FK. They have not managed to come away with any wins whatsoever whereas IFK Göteborg have just been too good for them, beating them in 67% of those ties.

The last league fixture between these clubs was Allsvenskan match day 10 on 11/07/2021 when it ended Östersunds FK 2-3 IFK Göteborg.

That time, Östersunds FK managed 54% possession and 12 shots on goal with 5 on target. Goals were scored by Francis Jno-Baptiste (57') and Simon Kroon (88').

The IFK Göteborg manager Mikael Stahre has zero fitness concerns whatsoever ahead of this game thanks to a fully healthy squad to choose from.

With a completely healthy group available for selection, the Östersunds FK manager Per-Joar Hansen has zero fitness worries to report ahead of this game.

It seems to us that Östersunds FK could really find it hard to break down a IFK Göteborg team who should own this match if all goes as we expect it to.

Our tip is for a very comprehensive 3-0 win for IFK Göteborg at full-time. 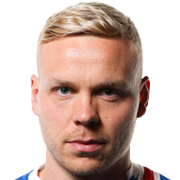 Generally used in the Striker position, Kolbeinn Sigþórsson was born in Reykjavik, Iceland. After having played his first senior match for AZ in the 2010 - 2011 season, the gifted Forward has hit 4 league goals in this Allsvenskan 2021 campaign so far in 17 appearances.

While we have made these predictions for IFK Göteborg v Östersunds FK for this match preview with the best of intentions, no profits are guaranteed. Always gamble responsibly, and with what you can afford to lose. Good luck with your selections.