Wisla Plock will be at Polsat Plus Arena Gdańsk on Sunday for the Ekstraklasa clash with home team Lechia Gdańsk.

Lechia Gdańsk, who won their previous game, will hope for a similar result following a 2-1 Ekstraklasa triumph over Górnik Zabrze.

At least three goals per match were seen in 5 of the last 6 fixtures where Lechia Gdańsk have played. Opposition teams scored 9 times in this period whereas Lechia Gdańsk amassed a tally of 8. Such a trend isn’t assured to follow through here, of course.

Coming into this clash, Lechia Gdańsk are winless against Wisla Plock in their last 2 league games.

Wisla Plock will go into this encounter following on from a 1-0 Ekstraklasa win as they beat Cracovia in their previous outing.

Wisla Plock have regularly broken through opposing defences of late, scoring 7 goals in their previous 6 matches. Having said that, Wisla Plock can also improve defensively after being scored against in 5 of those same outings.

Coming into this fixture, Wisla Plock are without an away win for the past 7 league games.

If we look at their past head to head duels dating back to 07/12/2019, both clubs have shared the honours with Lechia Gdańsk winning 3 of those games, Wisla Plock 3 and 0 being drawn after 90 minutes of play.

A combined sum of 12 goals were yielded between them in this period, with 6 of them from Gdańsk and 6 being from Wisła Płock. That’s an average goals per game of 2.

The last league contest featuring these clubs was Ekstraklasa match day 1 on 17/07/2022 when it ended Wisla Plock 3-0 Lechia Gdańsk.

At the other end, Lechia Gdańsk got 9 attempts on goal with 4 on target.

The Lechia Gdańsk manager Marcin Kaczmarek has no fitness worries whatsoever ahead of this clash owing to a fully injury-free squad to pick from.

Due to a completely healthy group available to select from, the Wisla Plock manager Pavol Staňo doesn’t have any fitness worries at all coming into this game.

We’re thinking that Wisla Plock and Lechia Gdańsk could well cancel each other out, with goals at a real premium.

Let’s see what happens, but it could well be that we end up with scores level and two clean sheets. We’re therefore seeing a 0-0 score after 90 minutes. 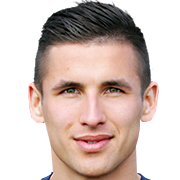 Regularly deployed in the Striker position, Łukasz Zwoliński was born in Szczecin, Poland. After having played his first senior match for Pogon Szczecin in the 2012 - 2013 season, the skilful Forward has scored 4 league goals in this Ekstraklasa 2022 - 2023 season to date in 12 appearances.

While we have made these predictions for Lechia Gdańsk v Wisla Plock for this match preview with the best of intentions, no profits are guaranteed. Always gamble responsibly, and with what you can afford to lose. Good luck with your selections.