Our predictions, user poll and statistics for Lübeck v Wehen Wiesbaden can be found here (plus the best game odds).

Lübeck will be hoping to bounce back here after a 1-0 3rd Liga loss in their previous game against Magdeburg.

Lübeck have not been the best at stopping their opponents lately, although they have also managed to score goals themselves. Looking at their last 6 games, Lübeck have conceded in 6 of them as well as managing to get on the scoresheet in 5 of those games. Such a trend isn’t assured to be carried forward here, of course.

Analysis of their past results shows that Lübeck:

Since suffering a loss in their previous game against Duisburg in 3rd Liga action, Wehen Wiesbaden and their travelling fans will hope for a better result here.

During their six most recent matches, Rüdiger Rehm's Wehen Wiesbaden have managed to stick the ball in the net 8 times - yielding them a goals per game average of 1.33.

Ahead of this clash, Wehen Wiesbaden are unbeaten in their last 2 away league matches.

The last league encounter featuring these sides was 3rd Liga match day 16 on 15/12/2020 when it ended Wehen Wiesbaden 4-2 Lübeck.

The referee was Franz Bokop.

We’re of the opinion that Wehen Wiesbaden and Lübeck may find themselves both scoring more than one goal each in what promises to be a fairly balanced contest.

While there should be goals at both ends, it’s too close to call. We therefore think that it’s going to be a very competitive game with a 2-2 after 90 minutes. 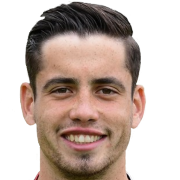 Typically played in the Central Defensive Midfielder position, Ersin Zehir was born in Lübeck, Germany. After making a first senior appearance for St. Pauli in the 2017 - 2018 season, the accomplished Midfielder has scored 5 league goals in this 3. Liga 2020 - 2021 campaign so far coming from a total of 28 appearances.

While we have made these predictions for Lübeck v Wehen Wiesbaden for this match preview with the best of intentions, no profits are guaranteed. Always gamble responsibly, and with what you can afford to lose. Good luck!