Olympiacos will arrive at Toumba Stadium on Wednesday for the Super League tie with home team PAOK.

All PAOK v Olympiacos game predictions, stats and user poll are shown below (plus the best game odds).

PAOK are hoping to win again following the 3-1 Super League triumph versus Volos.

It has been all too rare in recent games where PAOK haven’t conceded. The reality is that Dikefalos tou Vorra have been scored against in 5 of their previous 6 games, giving up 7 goals during that time. We will just have to see whether or not that trend will be sustained here.

Coming into this contest, PAOK are unbeaten in their last 9 league matches at home. A very good run at home.

Olympiacos head into the game following on from a 1-2 Super League win in the defeat of Panetolikos in their last game.

In that game, Olympiacos managed 52% possession and 9 shots on goal with 5 on target. For Olympiacos, goals were scored by Kostas Fortounis (4') and Youssef El-Arabi (66'). For their opponents, Panetolikos got 6 shots at goal with 5 of them on target. Aymen Tahar (48') scored for Panetolikos.

In their previous half-dozen clashes, Olympiacos have bagged a tally of 21 goals. Τhrylos have also not failed to score on each one of those occasions. In that time, they have had 3 goals scored by their opponents.

Going into this game, the form guide shows that Olympiacos:

Looking over their most recent head-to-head clashes stretching back to 30/09/2018 tells us that PAOK have won 3 of these & Olympiacos 2, with the number of drawn games being 1.

A combined total of 10 goals were scored between the two sides in this period, with 6 for Dikefalos tou Vorra and 4 being from Τhrylos. The average goals per game has been 1.67.

Owing to a completely injury-free squad available for selection, Olympiacos manager Pedro Martins does not have any fitness concerns to report before this clash.

Looking at these two, we feel that Olympiacos and PAOK could well end up finding themselves level here, with both teams capable of netting.

Will be interesting to see how this one goes, with a good chance of a draw. We’re therefore predicting a 1-1 scoreline at the end of the 90 minutes. 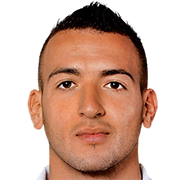 Customarily playing in the Central Attacking Midfielder position, Omar El Kaddouri was born in Belgium. After having played his first senior match for Brescia in the 2008 - 2009 season, the skilful Midfielder has contributed 2 league goals in the Super League 2020 - 2021 campaign to date from a total of 11 appearances.

While we have made these predictions for PAOK v Olympiacos for this match preview with the best of intentions, no profits are guaranteed. Always gamble responsibly, and with what you can afford to lose.