Górnik Zabrze will visit Stadion Cracovii on Saturday for the Ekstraklasa tie with hosts Cracovia.

View all Cracovia v Górnik Zabrze tips, stats and our pre-match poll below - plus the latest match odds.

Cracovia are hoping to win again after their last result, the 1-2 Ekstraklasa victory versus BBT Nieciecza.

It’s not been often in recent games where Cracovia have kept a clean sheet. In fact, Cracovia have failed to prevent opponents from scoring in 6 of their previous 6 matches, giving up 10 goals on the way.

Going into this one, Cracovia haven't been beaten in the league by Górnik Zabrze in their last 2 matches.

Following on from tasting defeat last time out to Piast Gliwice in Ekstraklasa action, Górnik Zabrze and their travelling fans will hope for a better result here.

The numbers tell their own story, and Górnik Zabrze have been scored against in 5 of their last 6 matches, letting opponents get 8 goals in total. In defence, Górnik Zabrze just haven’t been too solid at all. That pattern won’t necessarily be sustained here, of course.

Going into this contest, Górnik Zabrze have not won against Cracovia when having played them away from home in the previous 5 matches in the league. They'll be keen to stop this run.

Inspecting their past head to head meetings dating back to 22/10/2018 shows that Cracovia have won 4 of these and Górnik Zabrze 1, with the tally of drawn results being 1.

A total of 13 goals were yielded between them in this period, with 9 of them from Pasy and 4 coming from Trójkolorowi. This gives an average number of goals per game equal to 2.17.

The previous league contest between the two was Ekstraklasa match day 28 on 03/05/2021 when the final score was Cracovia 1-0 Górnik Zabrze.

That day, Cracovia had 44% possession and 10 shots at goal with 3 of them on target. Their only player on the scoresheet was Sergiu Hanca (3').

Górnik Zabrze got 11 attempts on goal with 3 of them on target.

The referee was Damian Kos.

Filip Balaj (Edema in the knee) and Thiago (Cruciate Ligament Rupture) will not be able to play for Cracovia manager Michał Probierz.

Owing to an otherwise available group, there is just the lone fitness worry for the Górnik Zabrze gaffer Jan Urban to be concerned about. Lukas Podolski (Corona virus) misses out for this game.

We believe that Górnik Zabrze will need to push hard to see themselves scoring against this Cracovia team who we reckon will win and very possibly keep a clean sheet.

We’re therefore tipping a very even match with a 1-0 winning margin for Cracovia at the conclusion of the game. 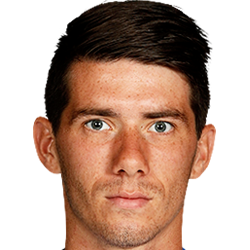 Mostly deployed in the Centre Midfield position, Pelle van Amersfoort was born in Netherlands. After having made a senior debut playing for SC Heerenveen in the 2014 - 2015 season, the accomplished Midfielder has hit 4 league goals in the Ekstraklasa 2021 - 2022 campaign to date in 6 appearances.

While we have made these predictions for Cracovia v Górnik Zabrze for this match preview with the best of intentions, no profits are guaranteed. Always gamble responsibly, and with what you can afford to lose. Best of luck with your selections.