The First League match at Stadion Lokomotiv on Tuesday sees hosts Lokomotiv Plovdiv up against CSKA 1948.

Our Lokomotiv Plovdiv v CSKA 1948 tips, poll and stats can be seen in full below - plus the latest match odds.

Lokomotiv Plovdiv will be hoping for a better result after a 1-0 First League losing effort in their last game against CSKA 1948.

Under three goals per game were recorded in 6 of the last 6 meetings where Lokomotiv Plovdiv have been involved. In terms of the goal distribution from this period, opposition teams scored a total of 2 and Smarfovete managed a tally of 7.

In the course of their six latest matches, Krasimir Balakov's CSKA 1948 have seen their efforts on goal rewarded a total of 7 times, earning them the goals scored per game average of 1.17.

The last league encounter featuring these clubs was First League match day 26 on 26/04/2021 which ended up with the score at CSKA 1948 1-0 Lokomotiv Plovdiv.

Lokomotiv Plovdiv got 4 attempts on goal with 0 on target.

Regarding absentees, there’s just a single fitness concern for the Lokomotiv Plovdiv gaffer Aleksandar Tunchev to be concerned about from an otherwise complete squad. Martin Lukov (Ankle Injury) won’t play.

Owing to a completely healthy squad available for selection, CSKA 1948 boss Krasimir Balakov doesn’t have any fitness worries to speak of coming into this clash.

We’re inclined to think that Lokomotiv Plovdiv can create the chances to score more than once against CSKA 1948, who will not find it easy finding the net themselves.

Accordingly, we see a pretty comfortable 2-0 winning score for Lokomotiv Plovdiv when all’s said and done. 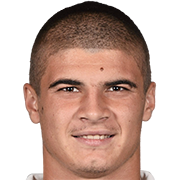 Generally deployed in the Striker position, Georgi Minchev was born in Bulgaria. After making a first senior appearance for Litex Lovech in the 2013 - 2014 season, the accomplished Forward has hit 8 league goals in the First League 2020 - 2021 season so far in a total of 26 appearances.

We have made these Lokomotiv Plovdiv v CSKA 1948 predictions for this match preview with the best intentions, but no profits are guaranteed. Please always gamble responsibly, only with money that you can afford to lose. Good luck with your selections.