This Montana v Slavia Sofia live stream video is scheduled for 14/05/2021. Supporters of the teams can watch this clash on a live streaming service if this match is featured in the schedule referenced above. Here we give useful info for watching this First League match that includes the most recent guide to form, h2h meetings and our match tips.

To watch this game via other ways, check television listings for your local region. These broadcasting contracts are typically granted on a per-competition/league or even individual fixture level. For games shown live on regional tv programmes, check the schedules on stations like BT Sport, Amazon Prime Video, Sky Sports, Now TV, iTV, Canal+, Fox Soccer, ESPN that are relevant for your current location.

When the abovementioned broadcaster has the rights to the Montana v Slavia Sofia soccer live streaming service, you can watch it on your mobile (iPhone, Android including Tecno) and computer plus tablet (eg iPad, Huawei MatePad).

Post-game, we may also provide a link to highlights from time to time. We aren’t responsible for transmitting any match video content linked to from this site. All legal issues must be directed to the hosters/owners of this content.

All Montana v Slavia Sofia game predictions, stats and user poll are shown below - as well as the best betting odds.

Montana will be hoping to bounce back here after the 1-0 First League loss in their previous game against Botev Vratsa.

It has been all too rare in recent games where Montana have managed to hold out for a full 90 minutes. In fact, Montana have failed to prevent opponents from scoring in 5 of their previous 6 matches, shipping 10 goals during that time.

Slavia Sofia will go into the clash following a 0-3 First League win versus Etar Veliko Tarnovo in their most recent game.

In that match, Slavia Sofia managed 44% possession and 10 shots on goal with 5 on target. For Slavia Sofia, the scorers were Radoslav Kirilov (54', 69') and Peter Makrillos (81'). For their opponents, Etar Veliko Tarnovo got 4 attempts on goal with 2 of them on target.

In 5 of the previous six clashes involving Slavia Sofia, a comparatively low number of goals have been scored between them and opposing teams. The overall average goals scored per game in that spell is a meagre 2, with the number of goals averaged by The White Avalanche being 1.33. We shall soon find out whether or not that trend will be continued on here.

Heading into this contest, Slavia Sofia have not been beaten in their last 3 away league matches.

A glance at their prior head-to-head meetings dating back to 10/12/2016 tells us that Montana have won 1 of them and Slavia Sofia 4, with the tally of draws standing at 1.

In all, 18 goals were shared by the two clubs in this period, with 7 from Montana and 11 being from The White Avalanche. That’s an average goals per game figure of 3.

The previous league contest featuring the two was First League match day 1 on 03/05/2021 when it ended Slavia Sofia 1-1 Montana.

In that game, Slavia Sofia had 56% possession and 5 attempts at goal with 2 on target. The goalscorers were Andrea Hristov (10' Own goal) and Georgi Valchev (45').

Montana got 6 shots at goal with 4 on target.

Montana manager Atanas Atanasov doesn’t have any fitness worries whatsoever ahead of this match with a fully injury-free group to choose from.

Thanks to a fully healthy squad to pick from, Slavia Sofia manager Aleksandr Tarkhanov does not have any fitness worries at all before this match.

Our thinking is that Montana are dangerous enough to find the back of the net against this Slavia Sofia team, however a single goal is unlikely to be as many as they’ll concede.

Our tip is for both teams to score in a 1-2 advantage for Slavia Sofia at full-time. Should be an interesting one. 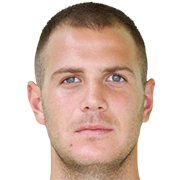 Normally taking to the field in the Centre Midfield position, Vladimir Aytov was born in Bulgaria. Having made a first senior appearance for Botev in the 2014 - 2015 season, the dangerous Midfielder has scored a sum of 3 league goals in this First League 2020 - 2021 season so far from a total of 20 appearances.

While we have made these predictions for Montana v Slavia Sofia for this match preview with the best of intentions, no profits are guaranteed. Always gamble responsibly, and with what you can afford to lose. Good luck!

⚽️ Where can I find the tips for other First League games?