Real Zaragoza arrive at Municipal Nuevo Urritxe on Sunday for the La Liga 2 fixture with home side Amorebieta.

For all of our match predictions, pre-game poll and statistics for Amorebieta v Real Zaragoza, scroll down - plus the latest betting odds.

Amorebieta will be looking for an improved result here after a 2-0 La Liga 2 defeat in their last game at the hands of Real Oviedo.

In that match, Amorebieta had 39% possession and 8 attempts at goal with 2 of them on target. For their opponents, Real Oviedo had 15 shots on goal with 6 on target. Viti Rozada (25') and Borja Sánchez (32') scored for Real Oviedo.

Fixtures featuring Amorebieta have usually been absorbing encounters lately with plenty of scoring being the norm. Over their past six games alone, a grand total of 20 goals have been recorded for both sides combined (at an average of 3.33 goals per game) with 9 of these accredited to Amorebieta.

Since suffering a loss in their previous game against Leganés in La Liga 2 competition, Real Zaragoza will be aiming to make amends here.

In that match, Real Zaragoza managed 62% possession and 13 shots at goal with 3 on target. At the other end, Leganés got 10 attempts at goal with 4 of them on target. Lazar Ranđelović (15') and Gaku Shibasaki (65') scored for Leganés.

Over the course of 5 of the prior six clashes featuring Real Zaragoza, a notably low volume of goals have been hit between them and opposing teams. The overall average goals scored per game within that period comes out as a paltry 2.33, with the number of goals averaged by Blanquillos equalling 1.33. Nevertheless, it remains to be seen whether that trend shall be replicated in this upcoming game.

The Amorebieta boss Iñigo Vélez will be happy not to have any fitness worries to speak of before this clash owing to a fully injury-free group available for selection.

Due to a fully injury-free group to pick from, the Real Zaragoza manager Juan Ignacio Martínez has zero fitness worries to report ahead of this match.

Our feeling is that Real Zaragoza and Amorebieta could well end up finding themselves level here, with both teams capable of netting.

Let’s see how this one goes, but it looks this could be a draw. We’re therefore tipping a tight encounter with a 1-1 scoreline when all is said and done. 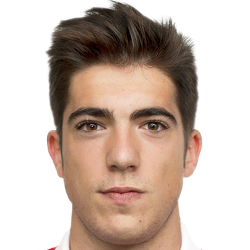 Normally used in the Right Attacking Midfielder position, Larrazabal was born in Bilbao, Spain. After making a first senior appearance for Athletic Bilbao in the 2019 - 2020 season, the goalscoring Midfielder has bagged 3 league goals in the LaLiga2 2021 - 2022 season to date in 15 appearances.

While we have made these predictions for Amorebieta v Real Zaragoza for this match preview with the best of intentions, no profits are guaranteed. Always gamble responsibly, and with what you can afford to lose. We wish you the best of luck.