This Fleetwood Town v Blackpool live stream video is ready for broadcast on 03/12/2020. Football fans can watch the game on a live streaming service if this match is featured in the schedule provided above. Here we provide you with useful info for watching this League One game including the most recent team form, head to head meetings and our game views.

In order to view this game using other sources, look up TV channel schedules relating to your local region. Such broadcasting contracts are typically allocted on a per-competition/league or even single fixture arrangement basis. For games shown live on regional television programmes, check the schedules on channels such as BT Sport, Amazon Prime Video, Sky Sports, Now TV, iTV, Canal+, Fox Soccer, ESPN depending on your location.

Where the abovementioned broadcaster is showing Fleetwood Town v Blackpool soccer live streaming service, you’ll be able to watch it on your mobile (iPhone, Android including Motorola) and computer as well as tablet (eg iPad, Samsung Galaxy Tab).

Post-game, we might also link to the match highlights from time to time. We are not responsible for transmitting any match video content linked to from here. All legal issues must be dealt with via the hosters/owners of such content.

Fleetwood Town will face off against away side Blackpool at Highbury Stadium in the League One game on Saturday.

Our tips, poll and stats for Fleetwood Town v Blackpool can all be found here including the latest game odds.

Fleetwood Town will be looking for an improved result here after the 1-0 League One losing effort in their last game against Northampton Town.

Cian Bolger (47') was the scorer for Northampton Town.

The Fishermen have been finding it hard to keep clean sheets lately, but they have also managed to convert their own chances into goals. Looking at their last 6 games, The Fishermen have seen their goal breached in 6 of them while also getting on the scoresheet in 5 of those matches. That kind of trend won’t necessarily follow through into this game, however.

Blackpool will come into the clash following a 1-0 League One win as they beat Portsmouth in their last match.

The only name on the scoresheet from Blackpool was Keshi Anderson (64').

Over the course of their previous half-dozen clashes, Blackpool have amassed a tally of 11 goals. The Seasiders have also managed to score on each one of those occasions. Over that period, they have had 5 goals go against them.

Checking on their past head to head clashes going back to 25/11/2017 tells us that Fleetwood Town have won 1 of them and Blackpool 3, with the number of drawn matches being 2.

15 goals were shared by the two clubs in these games, with 6 for The Fishermen and 9 being from The Seasiders. That’s an average goals per game of 2.5.

The previous league game between these sides was League One match day 37 on 07/03/2020 when the final score was Fleetwood Town 0-0 Blackpool.

Fleetwood Town manager Joey Barton has no fitness worries whatsoever before this match with a completely healthy squad ready to go.

Owing to a completely healthy group to pick from, Blackpool boss Neil Critchley doesn’t have any fitness worries to speak of coming into this clash.

We envisage that Blackpool will surely be able to breach the defence of this Fleetwood Town outfit, however it is unlikely to be as many as they’ll concede.

We are anticipating both teams to score in a 2-1 victory for Fleetwood Town after the 90. Let’s just see how this one goes. 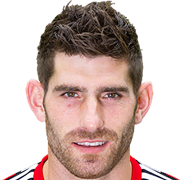 Customarily used in the Striker position, Ched Evans was born in Rhyl, Wales. After having played his first senior match for Norwich City in the 2007 - 2008 season, the skilful Forward has netted 5 league goals in this League One 2020 - 2021 campaign to date in 14 appearances.

We have made these Fleetwood Town v Blackpool predictions for this match preview with the best intentions, but no profits are guaranteed. Please always gamble responsibly, only with money that you can afford to lose. Best of luck with your selections.

⚽️ Where can I see the odds for other League One games?

View all of the upcoming (and previous) League One predictions & previews here.