The Ekstraklasa meeting at Stadion Widzewa Łódź on Saturday will see hosts Widzew Łódź facing opposition in the form of Pogon Szczecin.

Our Widzew Łódź v Pogon Szczecin predictions, statistics and match poll can be seen below - along with the latest match odds.

Widzew Łódź will be looking for another win after the 0-1 Ekstraklasa triumph against Korona Kielce.

In their last 6 games, Janusz Niedźwiedź's Widzew Łódź have scored 8 times which gives them an average number of goals per match equal to 1.33.

Heading into this contest, Widzew Łódź have not registered a win against Pogon Szczecin in their previous 2 matches in the league.

Pogon Szczecin will go into the clash following on from a 1-2 Ekstraklasa win over Radomiak Radom in their previous game.

Illustrating their fondness for productive matches, the back of the net has been hit 24 times in the last 6 matches in which Pogon Szczecin have taken to the pitch, giving a mean average of 4 goals per meeting. Their opponents have hit 13 of those goals.

Heading into this fixture, Pogon Szczecin are undefeated in their last 3 league matches away from home.

Checking on their prior head to head meetings stretching back to 28/04/2007 shows that Widzew Łódź have won 2 of these and Pogon Szczecin 3, with the number of drawn games standing at 1.

In all, 14 goals were scored between the two sides in these games, with 6 of them for Czerwona Armia and 8 for Pogoń. That’s an average goals per game of 2.33.

The previous league meeting featuring these clubs was Ekstraklasa match day 1 on 17/07/2022 when the final score was Pogon Szczecin 2-1 Widzew Łódź.

In that match, Pogon Szczecin had 53% possession and 16 shots at goal with 8 of them on target. The goals were scored by Luka Zahovič (45') and Vahan Bichakhchyan (71').

At the other end, Widzew Łódź got 15 attempts on goal with 4 of them on target. Bartłomiej Pawłowski (19') scored.

The Widzew Łódź boss Janusz Niedźwiedź has no fitness worries at all coming into this match owing to a completely healthy group available for selection.

In our view, Widzew Łódź will need to push hard to see themselves scoring against this Pogon Szczecin team who we think will gain the upper hand.

We therefore think that it’s going to be a very even match with a 0-1 winning margin for Pogon Szczecin at the end of the 90. 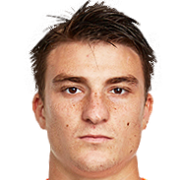 Normally played in the Striker position, Jordi Sánchez was born in Barcelona, Spain. Having made a first senior appearance for CD Numancia in the 2018 - 2019 season, the dangerous Forward has struck 5 league goals in this Ekstraklasa 2022 - 2023 season to date in a total of 17 appearances.

While we have made these predictions for Widzew Łódź v Pogon Szczecin for this match preview with the best of intentions, no profits are guaranteed. Always gamble responsibly, and with what you can afford to lose. Good luck!