The RKC Waalwijk v Willem II live stream video is set to be broadcast on 15/01/2021. Supporters of the teams can watch the clash on a live streaming service should the game be included in the schedule referenced above. Here we show helpful information for watching this Eredivisie game including the most recent team form, h2h clashes and our game views.

To view the match via other ways, look up tv listings relating to your local region. These broadcasting deals are generally allocated on a per-competition/league or even individual fixture arrangement basis. For matches shown live on regional tv programmes, check the schedules on the likes of BT Sport, Amazon Prime Video, Sky Sports, Now TV, iTV, Canal+, Fox Soccer, ESPN depending on your location.

After the match finishes, we may also provide a link to highlights from time to time. We aren’t responsible for transmitting any game video content linked to from here. All legal complaints must be done by contacting the hosters/owners of this content.

Willem II are the guests at Mandemakers Stadion on Sunday for the Eredivisie game with hosts RKC Waalwijk.

To see all of our predictions, user poll & stats for RKC Waalwijk v Willem II, scroll down - as well as the best betting odds.

RKC Waalwijk head into this match coming off the back of a 1-1 Eredivisie drawn game against SC Heerenveen.

The only player to score from RKC Waalwijk was Richard van der Venne (56'). Henk Veerman (7') scored for SC Heerenveen.

It’s been all too rare in recent times where RKC Waalwijk have kept a clean sheet. The facts show that RKC have been scored against in 6 of their previous 6 clashes, giving up 12 goals along the way. We will have to find out if that trend will end up being continued on here.

Their prior results show that RKC Waalwijk:

Since suffering a loss in their previous game against FC Groningen in Eredivisie action, Willem II and their travelling supporters will be hoping that they can get a better result in this one.

Willem II have attacked well leading up to this encounter, scoring 8 goals in their last 6 matches. While their manager Adrie Koster will no doubt take that as a positive sign, Tricolores can also improve defensively after being scored against in 6 of those same games.

Taking a look at their past results, Willem II:

An examination of their past head to head results going back to 22/04/2007 reveals that these fixtures have not been good ones for RKC Waalwijk. They’ve not been able to get any victories whatsoever whereas Willem II have been the better of the two, beating them in 67% of those games played.

A sum of 10 goals were scored between them throughout the course of those matches, with 3 for RKC and 7 netted by Tricolores. This gives an average number of goals per game equal to 1.67.

The last league clash featuring the two was Eredivisie match day 11 on 26/10/2019 when it finished Willem II 2-1 RKC Waalwijk.

RKC Waalwijk manager Fred Grim will be happy not to have any fitness concerns at all before this clash thanks to a fully healthy squad ready to go.

Thanks to a mainly full-strength group of players, there’s only a single fitness problem for the Willem II boss Adrie Koster to contend with. Jordens Peters (Knock) won’t be playing here.

In our opinion, RKC Waalwijk will need to put in a solid display to hit the back of the net against this Willem II side who we reckon will score at least once to put them ahead.

We’re therefore tipping a hard-fought 0-1 winning score for Willem II when the referee blows for full-time. 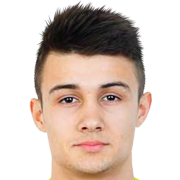 Typically taking up the Striker position, Vitalie Damaşcan was born in Soroca, Moldova. After having made a senior debut playing for Zimbru Chişinău in the 2015 - 2016 season, the accomplished Forward has managed 2 league goals in this Eredivisie 2020 - 2021 campaign to date in 11 appearances.

We have made these RKC Waalwijk v Willem II predictions for this match preview with the best intentions, but no profits are guaranteed. Please always gamble responsibly, only with money that you can afford to lose. Good luck with your selections.

⚽️ Where can I find the predictions for other Eredivisie matches?

You can see all of the next (and previous) Eredivisie predictions & previews here.