All Brentford v Middlesbrough match predictions, user poll and stats are shown below - plus the latest match odds.

Brentford won’t want a repeat of their last result here after the 2-0 EFL Cup defeat last time out to Tottenham Hotspur.

It has been seldom in recent games where Brentford have shown defensive steel. The reality is that The Bees have failed to prevent opponents from scoring in 5 of their previous 6 matches, shipping 7 goals in the process.

Middlesbrough will go into this encounter following on from a 1-3 Championship win to defeat Wycombe Wanderers in their most recent game.

Looking over their prior head to head clashes dating back to 17/03/2018 tells us that Brentford have won 3 of these games and Middlesbrough 1, with the tally of drawn results standing at 2.

An aggregate of 14 goals were shared by the two clubs throughout the course of those matches, with 8 from The Bees and 6 for The Boro. The average number of goals per game works out to 2.33.

The previous league game between the two was Championship match day 11 on 07/11/2020 which ended up with the score at Brentford 0-0 Middlesbrough.

On that day, Brentford managed 60% possession and 8 shots on goal with 1 of them on target.

Middlesbrough got 7 attempts at goal with 1 on target.

Availability isn’t a big problem, with just one fitness concern for the Brentford manager Thomas Frank to contend with from of an almost fully healthy squad. Shandon Baptiste (Knee Surgery) misses out.

Owing to an otherwise full-strength group of players, there’s only a single fitness issue for the Middlesbrough gaffer Neil Warnock to contend with. Ashley Fletcher (Hamstring Injury) misses out for this game.

We’ve got the feeling that Middlesbrough should get enough chances to find the back of the net against this Brentford team, however that may not quite prevent them from conceding a couple at the other end.

We’re predicting a very close game with a 2-1 winning margin for Brentford after 90 minutes. Should be an interesting one. 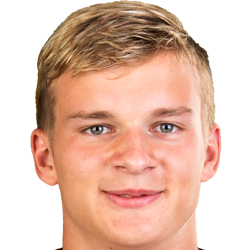 Regularly playing in the Striker position, Marcus Forss was born in Turku, Finland. After having made a senior debut playing for Brentford in the 2018 - 2019 season, the accomplished Forward has contributed 5 league goals in the Championship 2020 - 2021 campaign so far in a total of 17 appearances.

We have made these Brentford v Middlesbrough predictions for this match preview with the best intentions, but no profits are guaranteed. Please always gamble responsibly, only with money that you can afford to lose.