Scroll down to see all of the predictions, poll and statistics for Vorwärts Steyr v FC Liefering - plus the latest betting odds.

Vorwärts Steyr are hoping to win again after their last result, a 1-3 2. Liga victory against FC Juniors OÖ.

In their last 6 fixtures, Andreas Milot's Vorwärts Steyr have netted 8 times - an average number of goals per match equal to 1.33.

FC Liefering will come into the encounter following a 3-2 2. Liga win in the defeat of Dornbirn in their last outing.

In that game, FC Liefering had 54% possession and 12 attempts on goal with 4 on target. For FC Liefering, the scorers were Benjamin Šeško (9'), Luka Reischl (32') and Forson Amankwah (42'). On the other side, Dornbirn got 8 attempts at goal with 3 of them on target. Tom Zimmerschied (23') and Florian Prirsch (56') scored for Dornbirn.

In a total of 5 out of the previous 6 games involving FC Liefering, three or more goals have been struck. The average goals scored per match during that time is 4, with the number of goals averaged by FC Liefering coming out as 3.17.

Coming into this clash, FC Liefering have not been beaten in their last 5 away league matches.

The last league encounter featuring the two was 2. Liga match day 12 on 05/12/2020 which ended up with the score at FC Liefering 0-1 Vorwärts Steyr.

The match was refereed by Alexander Harkam.

There aren’t many personnel worries, with just the sole fitness concern for the Vorwärts Steyr manager Andreas Milot to be concerned with from an otherwise complete group of players. Michael Halbartschlager (Cruciate Ligament Rupture) will miss out.

With a fully healthy squad ready to go, FC Liefering manager Matthias Jaissle doesn’t have any fitness worries at all ahead of this clash.

We believe that Vorwärts Steyr will manage to score a goal against this FC Liefering outfit, but a single goal probably won’t quite be enough.

We’re therefore expecting a very close game with a 1-2 win for FC Liefering at the end of the 90 minutes. We’ll have to see what happens. 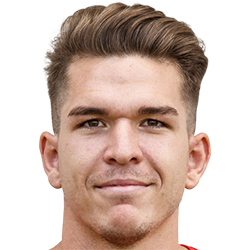 Customarily playing in the Left Attacking Midfielder position, Michael Drga was born in Ebenfurth, Austria. After having made a senior debut playing for SKN St. Pölten in the 2013 - 2014 season, the gifted Midfielder has hit 3 league goals in the 2. Liga 2020 - 2021 season to date in a total of 21 appearances.

We have made these Vorwärts Steyr v FC Liefering predictions for this match preview with the best intentions, but no profits are guaranteed. Please always gamble responsibly, only with money that you can afford to lose. Best of luck.