Fleetwood Town will do battle with visiting side Rotherham United at Highbury Stadium in the League One meeting on Saturday.

Scroll down for all of our predictions, poll and stats for the Fleetwood Town v Rotherham United game (inc. the best betting odds).

Fleetwood Town will want to continue from where they left off last time out with the 0-1 League One triumph vs Doncaster Rovers.

The only scorer from Fleetwood Town was Ellis Harrison (50').

Stephen Crainey's Fleetwood Town have netted a sum total of 7 times over their prior 6 outings. At the other end, the tally of goals that they have conceded in that time amounts to 9.

Coming into this contest, Fleetwood Town are unbeaten in the league by Rotherham United in their last 2 games.

In their previous fixture, Rotherham United drew 1-1 in the FA Cup match with Queens Park Rangers.

An examination of their prior head-to-head meetings going back to 13/04/2013 shows us that Fleetwood Town have won 2 of them & Rotherham United 3, with the number of draws standing at 1.

A combined sum of 21 goals were scored between them in these games, with 11 of them from The Fishermen and 10 for The Millers. That is an average goals per game value of 3.5.

There aren’t many selection issues, with just the lone fitness concern for the Fleetwood Town gaffer Stephen Crainey to be concerned about from an otherwise fully-primed group. Brad Halliday (Cruciate Ligament Injury) misses out.

With a completely healthy squad available to select from, the Rotherham United manager Paul Warne has zero fitness concerns whatsoever before this clash.

We’re of the view that Fleetwood Town will likely create enough chances to breach the defence of this Rotherham United team, but a single goal isn’t likely to be as many as they will have scored against them.

We are therefore anticipating a narrow 1-2 victory for Rotherham United when the referee blows the final whistle. We’ll have to see what happens. 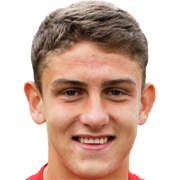 Mostly deployed in the Centre Midfield position, Harrison Biggins was born in Sheffield, England. Having made his senior debut playing for Fleetwood Town in the 2017 - 2018 season, the gifted Midfielder has contributed 4 league goals in the League One 2021 - 2022 campaign to date from a total of 23 appearances.

While we have made these predictions for Fleetwood Town v Rotherham United for this match preview with the best of intentions, no profits are guaranteed. Always gamble responsibly, and with what you can afford to lose. Good luck if you do place a bet today.