Return to this page a few days before the scheduled game when this expired prediction will be updated with our full preview and tips for the next match between these teams.
Full-Time Result Prediction
👉
Levski Sofia to Win

Levski Sofia head to Stadion Ivaylo on Sunday for the First League game with home side Etar Veliko Tarnovo.

Our full set of predictions, statistics and match poll for Etar Veliko Tarnovo v Levski Sofia can be seen below - as well as up-to-date odds.

Etar Veliko Tarnovo will be hoping for a better result following the 6-0 First League defeat in their last game at the hands of Ludogorets Razgrad.

Etar Veliko Tarnovo have found it difficult to unlock defences in recent times. Their sum of goals equals just 2 versus opposing sides over the course of their last 6 fixtures. In those meetings, The Boyans have also seen the number of goals scored against them total 6.

Ahead of this meeting, Etar Veliko Tarnovo have not been beaten in their last 3 home league matches.

Levski Sofia will go into this clash following a 2-0 First League win as they beat Montana in their most recent fixture.

In that game, Levski Sofia had 59% possession and 7 shots at goal with 3 of them on target. For Levski Sofia, the scorers were Zdravko Dimitrov (14') and Steven Petkov (50'). At the other end, Montana had 3 attempts on goal with 0 on target.

Throughout their 6 most recent matches, Slaviša Stojanovič's Levski Sofia have slotted home a total of 7 times - yielding them the goals scored per game average of 1.17.

Going into this one, Levski Sofia haven’t won away from home in the past 6 league games.

A quick look at their past head to head meetings stretching back to 25/08/2018 reveals that these encounters have been miserable for Etar Veliko Tarnovo. They have not managed to get any victories at all whereas Levski Sofia have been too good for them, finishing as winners in 83 per cent of those games played.

A total of 13 goals were yielded between them in this period, with 3 of them for The Boyans and 10 created by The Blue Avalanche. That’s an average goals per game figure of 2.17.

The last league match between the two was First League match day 5 on 13/09/2020 which finished with the scoreline of Levski Sofia 2-1 Etar Veliko Tarnovo.

The referee was Stanimir Trenchev.

Etar Veliko Tarnovo boss Aleksandar Tomash has no fitness concerns at all ahead of this match thanks to a completely injury-free squad available to choose from.

In our view, Etar Veliko Tarnovo could find themselves struggling to score against this Levski Sofia outfit who we think will end up scoring and possibly keep a clean sheet as well.

We’re therefore seeing a very competitive encounter with a 0-1 winning score for Levski Sofia at full-time. 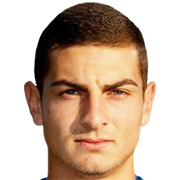 Generally played in the Striker position, Milcho Angelov was born in Irechekovo, Bulgaria. Having played his first senior match for Chernomorets Burgas in the 2012 - 2013 season, the goalscoring Forward has scored a sum of 2 league goals in the First League 2020 - 2021 season so far from a total of 16 appearances.

We have made these Etar Veliko Tarnovo v Levski Sofia predictions for this match preview with the best intentions, but no profits are guaranteed. Please always gamble responsibly, only with money that you can afford to lose.