Return to this page a few days before the scheduled game when this expired prediction will be updated with our full preview and tips for the next match between these teams.
Full-Time Result Prediction
👉
Mjällby AIF to Win

Our Östersunds FK v Mjällby AIF predictions, statistics and match poll can be seen below (plus the best game odds).

Östersunds FK will be wanting a better result here following the 3-0 Allsvenskan loss in their previous game against AIK.

Fixtures involving Östersunds FK have often been entertaining encounters lately with plenty of scoring being a common characteristic. Over their past half dozen games, a total of 20 goals have been recorded for both teams combined (at an average of 3.33 goals per game) with 5 of them coming from Östersunds FK.

Their prior results show that Östersunds FK:

Since suffering a loss in their previous game against IK Sirius in Allsvenskan action, Mjällby AIF will be aiming to make amends here.

Illustrating their penchant for productive encounters, goals have been seen as many as 20 times in the previous 6 matches in which Mjällby AIF have sent out their troops, yielding an average of 3.33 goals for each meeting. Their opponents have hit 8 of these goals. Historical results aside, time will tell whether the trend shall persist here in this match or not.

Looking over their most recent head-to-head clashes dating back to 17/06/2015 shows that Östersunds FK have won 2 of them and Mjällby AIF 4, with the number of drawn games standing at 0.

A total of 8 goals were scored between them in this period, with 2 of them from Östersunds and 6 created by Mjällby. This gives an average number of goals per game equal to 1.33.

The Östersunds FK boss Per-Joar Hansen does not have any fitness worries to speak of before this match thanks to a fully healthy group available to choose from.

Thanks to a fully healthy group ready to go, the Mjällby AIF manager Anders Torstensson has no fitness concerns to speak of coming into this clash.

We’re of the opinion that Östersunds FK might well have a job on their hands to put one past this Mjällby AIF outfit who will likely score & stay on top.

We’ve gone for a hard-fought contest, finishing with a 0-1 victory for Mjällby AIF at the end of this one. 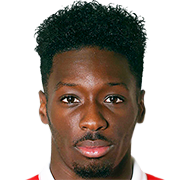 Usually playing in the Left Wing position, Blair Turgott was born in England. After having made a senior debut playing for Bradford City in the 2012 - 2013 season, the gifted Forward has scored 10 league goals in the Allsvenskan 2021 season to date in a total of 21 appearances.

While we have made these predictions for Östersunds FK v Mjällby AIF for this match preview with the best of intentions, no profits are guaranteed. Always gamble responsibly, and with what you can afford to lose. Best of luck with your selections.