View all of the Leyton Orient v Harrogate Town predictions, poll and stats below (including the best match odds).

Leyton Orient will be hoping to bounce back here following a 2-1 League Two loss in their previous game against Colchester United.

The only name on the scoresheet from Leyton Orient was Conor Wilkinson (88'). Jevani Brown (10', 72') was the scorer for Colchester United.

Leyton Orient have been on a persistent run of goalscoring form, hitting the target in each and every one of their last 6 games.

They have totted up the amount of 10 during that time and have conceded a total of 8.

Going into this one, Leyton Orient are unbeaten in their previous 2 home league matches.

In their previous game, Harrogate Town drew 1-1 in the League Two match with Crawley Town.

The only name on the scoresheet from Harrogate Town was Jack Muldoon (85'). Max Watters (27') was the scorer for Crawley Town.

The attacking players from Harrogate Town have suffered from a shortage of goals over their previous six clashes, netting the unsatisfactory return of only 3. In those fixtures, The Town have also seen the collective goal aggregate against them equal 8. We will find out whether or not that trend will end up being continued on into this next match.

Coming into this contest, Harrogate Town haven’t won away from home in the past 2 matches in the league.

The previous league game featuring these clubs was National League match day 52 on 19/04/2019 which ended up with the score at Leyton Orient 2-0 Harrogate Town.

Leyton Orient manager Ross Embleton has zero fitness concerns whatsoever ahead of this match with a fully healthy squad available for selection.

Due to a completely healthy squad available for selection, Harrogate Town manager Simon Weaver doesn’t have any fitness concerns to report ahead of this game.

We’re of the opinion that Harrogate Town and Leyton Orient could well end up finding themselves level here, with both teams capable of netting.

A draw looks like a realistic possibility, but we’ll see what happens. We therefore think that it’s going to be a very close game with a 1-1 scoreline at the conclusion of the game. 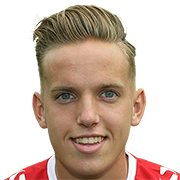 Customarily playing in the Central Attacking Midfielder position, Jordan Maguire-Drew was born in England. Having made a first senior appearance for Dagenham & Redbridge in the 2016 - 2017 season, the skilful Midfielder has struck 2 league goals in the League Two 2020 - 2021 campaign so far in a total of 9 appearances.

While we have made these predictions for Leyton Orient v Harrogate Town for this match preview with the best of intentions, no profits are guaranteed. Always gamble responsibly, and with what you can afford to lose. Good luck with your selections.