View all of the Logroñés v Girona FC predictions, poll and stats below including the latest game odds.

Logroñés prepare for this fixture coming off the back of a 0-0 La Liga 2 draw versus Castellón.

A recurring trait of recent Logroñés games is the number of results with a nil in them.

From their prior six clashes before this one, in 5 of them a bet on both teams scoring would've been a losing one. Putting that to one side, we’ll just have to find out whether such a trend will persist in this upcoming game.

Going into this contest, Logroñés haven’t won at home in the past 2 league games.

Girona FC will go into the clash following on from a 1-0 La Liga 2 win versus Tenerife in their last outing.

Over the course of their last half-dozen clashes, Girona FC have helped themselves to a total of 11 goals. Blanquivermells have additionally got on the scoresheet on each one of those occasions. During those fixtures, their defenders have seen 5 goals scored by their opponents.

On that day, Girona FC managed 52% possession and 15 attempts at goal with 4 on target. Their only player to score was Cristhian Stuani (58', 69').

Logroñés had 14 attempts at goal with 3 of them on target.

Logroñés boss Sergio Rodríguez has zero fitness concerns at all coming into this clash owing to a completely healthy group to choose from.

Owing to a completely healthy squad available to select from, Girona FC boss Francisco Rodríguez doesn’t have any fitness worries at all before this game.

We think that Logroñés could find themselves up against it to breach the defence of this Girona FC side who we reckon should get a goal themselves and run out victorious.

We therefore fancy a very competitive game with a 0-1 win for Girona FC after 90 minutes. 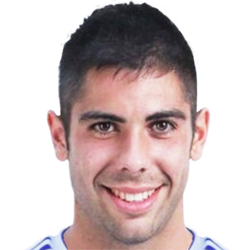 Typically deployed in the Striker position, Roni was born in Oviedo, Spain. Having made a first senior appearance for Logroñés in the 2020 - 2021 season, the goalscoring Forward has managed 3 league goals in the LaLiga2 2020 - 2021 campaign to date coming from a total of 30 appearances.

We have made these Logroñés v Girona FC predictions for this match preview with the best intentions, but no profits are guaranteed. Please always gamble responsibly, only with money that you can afford to lose. Good luck with your selections.