BBT Nieciecza will face off against visiting team Piast Gliwice at Stadion Bruk-Bet in this Ekstraklasa fixture on Saturday.

Scroll down to see all of the predictions, poll and statistics for BBT Nieciecza v Piast Gliwice - plus the latest betting odds.

BBT Nieciecza will play in this match coming off the back of a 1-1 Ekstraklasa drawn match vs Górnik Leczna.

Radoslav Látal's BBT Nieciecza have hit the back of the net 7 times in their preceding half-dozen outings. The corresponding tally of goals that have been scored against them in those games amounts to 7.

Following on from suffering a loss in their previous game against Lech Poznań in Ekstraklasa action, Piast Gliwice and their travelling fans will hope for a better result here.

In their previous 6 outings, Piast Gliwice have amassed the sum of 10 goals. Piast Gliwice have additionally got on the scoresheet on each one of those occasions. During those fixtures, they have had 7 goals scored by their opponents. Such a pattern isn’t assured to be continued here, though.

A review of their past head-to-head meetings going back to 28/10/2016 tells us that BBT Nieciecza have won 2 of these games and Piast Gliwice 3, with the number of drawn matches standing at 1.

In all, 16 goals were scored between the two sides in this period, with 6 from Słoniki and 10 coming from Gliwice. The average goals per game has been 2.67.

The last league clash featuring these clubs was Ekstraklasa match day 16 on 26/11/2021 when the final score was Piast Gliwice 2-1 BBT Nieciecza.

That time, Piast Gliwice had 46% possession and 19 attempts at goal with 6 on target. Goals were scored by Jakub Czerwiński (52') and Patryk Sokołowski (71').

On the other side, BBT Nieciecza had 9 attempts on goal with 1 on target. Muris Mešanović (45') was the scorer.

The referee was Bartosz Frankowski.

The BBT Nieciecza boss Radoslav Látal will be grateful not to have any fitness concerns at all ahead of this game thanks to a fully injury-free squad available to choose from.

With a fully injury-free group available to choose from, the Piast Gliwice boss Waldemar Fornalik has no fitness worries to report ahead of this clash.

Our feeling is that BBT Nieciecza might well have a job on their hands to hit the back of the net against this Piast Gliwice outfit who we reckon will score one, at least.

We’ve gone for a good tussle with a 0-1 victory for Piast Gliwice at full-time. 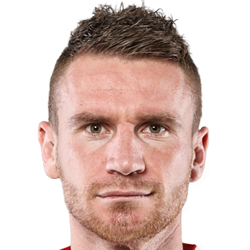 Regularly deployed in the Striker position, Muris Mešanović was born in Bosnia and Herzegovina. Having made his senior debut playing for Jihlava in the 2012 - 2013 season, the talented Forward has accumulated 9 league goals in the Ekstraklasa 2021 - 2022 campaign so far in 31 appearances.

While we have made these predictions for BBT Nieciecza v Piast Gliwice for this match preview with the best of intentions, no profits are guaranteed. Always gamble responsibly, and with what you can afford to lose.