Scroll down for all of our predictions, poll and stats for the Norwich City v Wigan Athletic game - plus the latest betting odds.

Norwich City will be hoping to return to winning ways here following the 1-0 Championship losing effort in their last game against Cardiff City.

In their previous fixture, Wigan drew 0-0 in the Championship tie with Preston North End.

Leam Richardson's Wigan Athletic have seen their efforts on goal rewarded 9 times throughout their previous sextet of matches. The overall goals that have been scored against them during that period adds up to 8.

Coming into this contest, Wigan Athletic have not emerged victorious against Norwich City when having played them away from home in the previous 2 league games.

A glance at their past head to head meetings going back to 06/12/2014 tells us that Norwich City have won 3 of them and Wigan 1, with the tally of draws being 2.

12 goals were shared by the two clubs throughout the course of those matches, with 7 from The Canaries and 5 belonging to The Latics. The average goals per game has been 2.

The last league game featuring the two was Championship match day 42 on 14/04/2019 which finished with the scoreline of Wigan Athletic 1-1 Norwich City.

On that occasion, Wigan Athletic had 35% possession and 17 attempts on goal with 4 of them on target. Their only player to score was Reece James (45').

At the other end, Norwich City got 13 attempts at goal with 4 of them on target. Teemu Pukki (81') was the scorer.

Due to a mostly full-strength group, there’s just the lone fitness issue for the Wigan gaffer Leam Richardson to contend with. Charlie Wyke (Heart Condition) misses out for this game.

We are inclined to think that The Latics might elect for a 4-2-3-1 lineup with a starting lineup of Ben Amos, Tendayi Darikwa, Jason Kerr, Curtis Tilt, Joseph Bennett, Max Power, Tom Naylor, Callum Lang, Will Keane, James McClean and Josh Magennis.

It looks to us that Norwich City will likely be able to score a couple when they meet Wigan Athletic, who won’t find it easy to find the back of the net.

We reckon that it will be a controlled 2-0 win for Norwich City after 90 minutes. 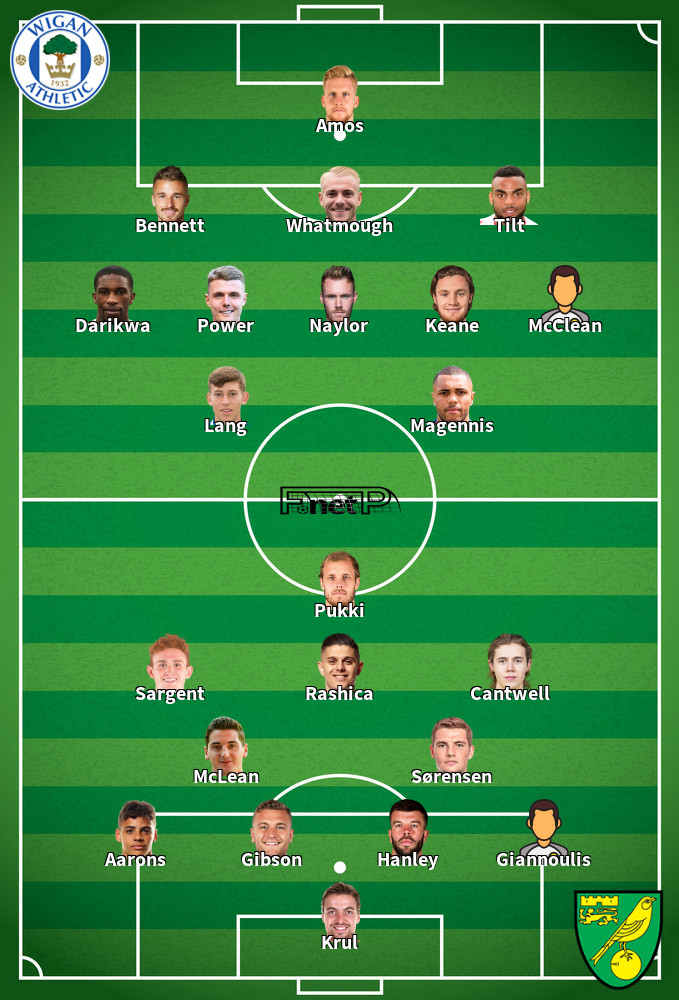 While we have made these predictions for Norwich City v Wigan Athletic for this match preview with the best of intentions, no profits are guaranteed. Always gamble responsibly, and with what you can afford to lose.