Our Vorwärts Steyr v SV Ried tips, poll and stats can be seen in full below (inc. the best betting odds).

Vorwärts Steyr will be wanting a better result here following the 1-2 2. Liga defeat in their last game at the hands of Austria Klagenfurt.

The only scorer from Vorwärts Steyr was Kevin Brandstätter (12'). Oliver Markoutz (30') and Patrick Greil (45') scored for Austria Klagenfurt.

Over their last 6 fixtures, Wilhelm Wahlmüller's Vorwärts Steyr have found the net 11 times which gives them an average number of goals scored per match of 1.83.

After a losing effort in their last game against FC Blau-Weiss Linz in 2. Liga competition, SV Ried will be aiming to make amends here.

Coming into this clash, SV Ried are without an away win for the past 2 league games.

It’s a low absenteeism rate, with just a single fitness concern for the Vorwärts Steyr gaffer Wilhelm Wahlmüller to be concerned with thanks to an almost full-strength squad. Nicolas Wimmer (Ruptured cruciate ligament) won’t play.

SV Ried manager Gerald Baumgartner has to choose a team with limited availability. Ante Bajic (Shoulder Injury), Thomas Reifeltshammer (Kidney problems), Nemanja Zikic (Cruciate Ligament Rupture), Johannes Kreidl (Knock) and Kennedy Boateng (Knock) are not ready for selection. Julian Wießmeier will not be able to play in this game through being suspended.

We believe that SV Ried can create a decent amount of chances and shots on target.

At the other end, Vorwärts Steyr might well find it difficult to find success in front of goal but we can see them managing to get on the scoresheet.

We’re predicting a comfortable 1-3 winning score for SV Ried when the referee blows the final whistle. 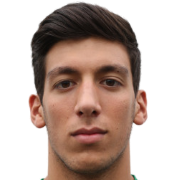 Generally playing in the Striker position, Okan Yilmaz was born in Austria. After having made a senior debut playing for FC Wacker Innsbruck in the 2016 - 2017 season, the gifted Forward has got 7 league goals in the 2. Liga 2019 - 2020 campaign to date in a total of 22 appearances.

While we have made these predictions for Vorwärts Steyr v SV Ried for this match preview with the best of intentions, no profits are guaranteed. Always gamble responsibly, and with what you can afford to lose. Good luck with your selections.